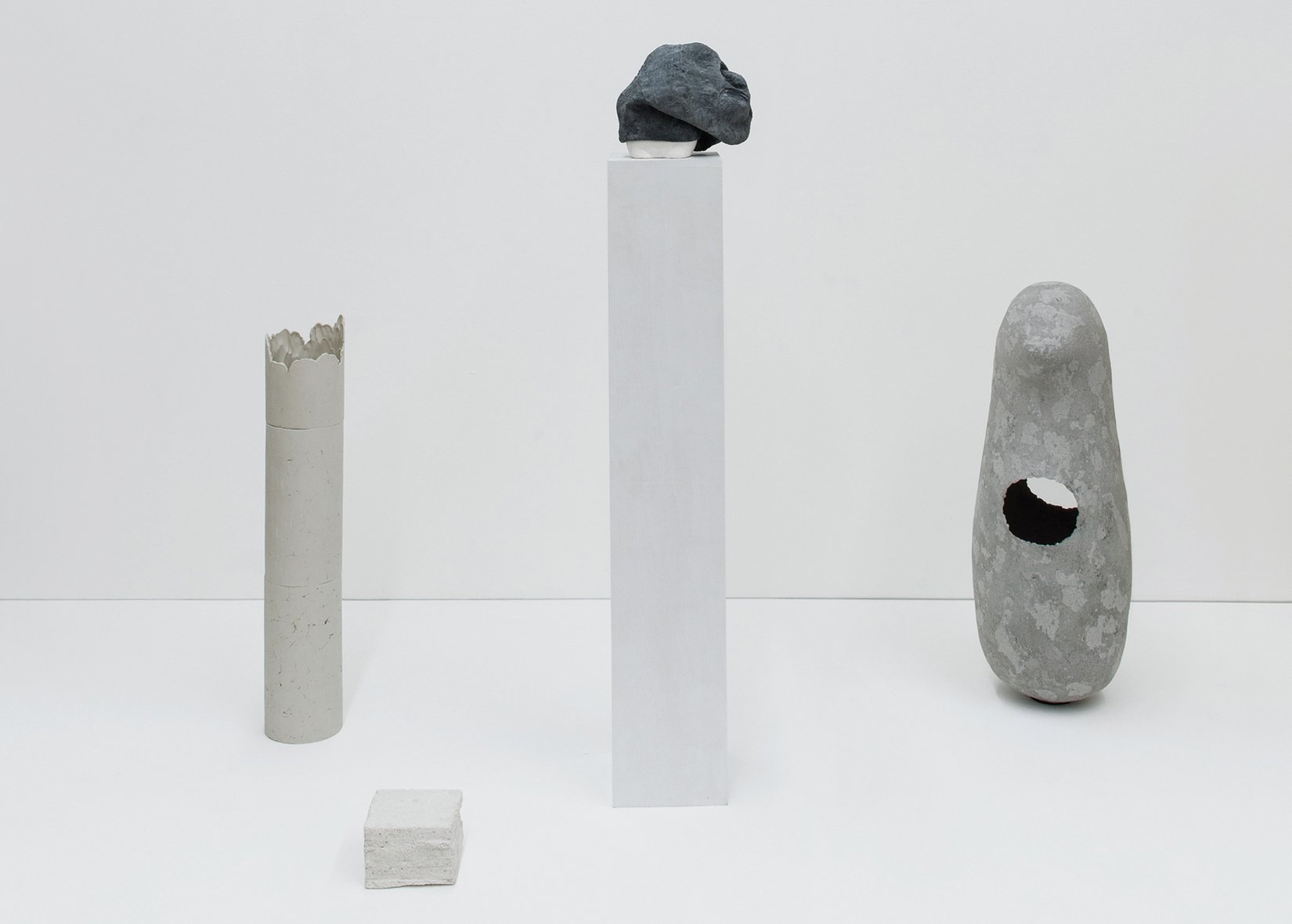 Vanessa Joan Müller on form, finding forms and indeterminacy in the work of Ute Müller

Sculpture is generally regarded as the result of a process of subtraction, whereas plastic art is one of addition. Either a form is fashioned out of a block of material, or individual components are assembled to create a whole. It is tempting to group Ute Müller’s work in the latter category, but it’s not as easy as that. Her material objects seem instead to posit a fundamental doubt about the idea of a predefined form, which is then implemented via the given artistic process. Indeed, the absence of other potential forms, which, in turn, points indirectly to the sheer limitlessness of possible formations, manifests itself constantly in the respective shapes of these works. Turning the argument on its head, this doesn’t mean, however, that Ute Müller’s works are fundamentally process-based or transformative. A salient element of her artistic practice is rather the casting of a designed thing, which, as a negative shape, becomes part of a plastic/material composition. In addition, various found objects come into play, not so much readymades, but more elements that have already found their final forms. Taken together, aluminium poles, copper and steel piping, the lengths and angles of which are frequently disrupted in their geometries and twisted, light, bright hollow shapes made from papier-mâché and wire, pieces of concrete and building materials, plates of glass and wooden boards establish a seemingly fluid grammar of possible objects constructed to form a new syntax in an invariably surprising manner; constellations comprising things and materials that alternate between form and antiform, biomorphic and geometric elements, contrast with one another here and, as fragmentary installations, link an idiosyncratic material aesthetic with targeted compositional dislocations.

Added to this scenario is the impression of an obvious momentariness; equally implicit in this momentariness is an instance of temporariness and the nascent potential for other forms. In their collaging of different elements, these works are sometimes distantly reminiscent of familiar things—utility objects, architectural details, or presentational exhibition furniture. At the same time, they defy any idea of functionality; moreover their frail, fragile designs also contradict any sense of utility value. Anything but definitive forms with manifestly unfinished aspects, these works—always taking in and contemplating the surrounding space—depict both their process of production as well as their potential to be something else. One almost gets the impression from the way they lean, the way they have been layered or stacked, that they might have only just arrived at their respective, ultimately speculative arrangements.

These works unfold to a certain extent in the interstices between space and time. The duality of suspended animation and potential alterability takes its place on an equal footing alongside an engagement with the physically and culturally determined properties of different materials; their presence and their partial absence: gaps in otherwise compact volumes, hollow forms floating on stelae. The connotation of forms and materials, their partial presence in modernism’s historical canon and ultimately their referential charge with resonances of other works and epochs, also situates them in a present that doesn’t deny the past.

These works always think about the modality of their staging. Plinths and pedestals are all integral to the works and, to a certain extent, lend the impression of provisionality in their institutionalised functionality. We may recall Constantin Brâncuși in this context, who repeatedly regrouped his works in his Paris studio to create new, expansive mise-en-scènes. Brâncuși declared the plinth to be a component of his works, viewing them frequently as an arrangement of modular elements. The use of contrasting materials, the splicing of organic and geometrical forms, are similarly characteristic strategies for these radically modernist artists linked by their eternal quest for form. Whereas in Brâncuși’s case any metaphysical qualities ultimately emerged via associations in the titles, for her part, Ute Müller leaves out any specific figurative references. And if Brâncuși’s oeuvre is endowed with a physically tangible formal solidity, Müller’s works are dominated by an impression of ambiguity, which ultimately results from her unencumbered exposition of respective processes of production.

In his essay “Man and the Sea Shell”, Paul Valéry frames his study of a seashell, specifically with regard to its acquisition of form, from the point of view of ambiguity.[1] What kind of form is it and why, above all, does it take this shape and not another? For Valéry, the seashell is less an objet trouvé and more an objet ambigu—a form that focuses our attention on how it may have been made. The form of the seashell ultimately cannot be explained by its material substance; it does not represent an intrinsic possibility of calcareous limestone per se. When compared to the comprehensibility of produced objects in which material and form coalesce in the production process, the seashell remains obscure. For Valéry, this seashell becomes more intelligible if one compares it with an artwork, for it is here that what we refer to as “material” and “form” are conjoined in a similarly conceptual fashion. The invented form must be inherent in the material. However, the artwork itself is independent of the process of production without which it would not exist; as a work—which, in and of itself, it is—it is independent of the artist who created it. It does not bear witness to the process of creation itself, but possesses its very own unique evidence.

It was Adorno who particularly celebrated Valéry’s “ability to view artworks from within in terms of the logic of their production”.[2] In addition, Valéry developed a concept of visual perception out of the logic of creation which departs from the traditional antagonism between seeing and thinking. He remarked that certain things we look at, in contrast to others, arouse a “delight and stimulation” in us with the effect that they are “more intelligible to the view, although more mysterious upon reflection”. We can conceive of the structure of these things but not their “formation”. Ultimately, our interest is not engaged by the sheer existence of the thing in question; we are intrigued because they are this way and not otherwise.

Interestingly enough, after reading “Man and the Sea Shell”, Le Corbusier for his part began a more intensive foraging for seashells, pebbles and flotsam, as well as bricks and crushed clinkers eroded by the sea. He discovered a kind of corrective to his previous rationalist design practice in this preoccupation with these porous objects that reside somewhere between nature and civilisation, and which tend to inspire indifference, in contrast to other more current categories. As an antidote to his technical approach to architecture, all of a sudden he now sought more ambiguous forms and objects that could not be fully explained. In his objets à réaction poétique, as he called them, Le Corbusier discovered the poetic potential of the figurative, which had the power to pose questions, inspire reflection, yet defied any form of definitive categorisation. Corbusier’s à réaction poétique opened up a world of forms beyond anything that an architect might ever invent or devise.

For me, Ute Müller’s sculptures are the result of a similar way of observing our environment, finding something special about simple things, expressing this in the union with other things and thereby communicating an approach that oscillates between the conceptual and the rational at one end of the spectrum and an intuitive response that embraces natural processes of formation at the other. In the interplay between compact forms on the one hand and open, geometric and organic, slender, towering stelae on the other, the distinct properties of both consolidate themselves even though they form an indivisible composite. These fragmentary installations can be conceived in a minimalistically elegant style or remain amorphously sketchy. They often seem to float in a grey area between becoming and being whenever they connect modernist, constructivist structures made from wood or metal with the suggestion of heads or objects, yet without becoming narrative in any way. They are reposeful sculptures that sometimes suggest they are unfinished, yet in their clear relationship to their surroundings, they are extremely earthed. In fact these works, although seemingly indiscriminately placed in space, inhabit a dense network of coordinates comprising spatial references and lines of perspective. They are seldom solitary pieces, but derive their full validity and resonance when taken together in the overall dialogue of their references to one another. These references are variable—they are defined, but not compellingly so. In any case, as far as Valéry was concerned, bringing the artistic process to a close is de facto an arbitrary action, “for the object is nothing other than one condition among other conditions”. The work is the process in itself and as such can “continue undefined”.

This also holds for Ute Müller’s paintings which treat similar subject matter in a different way: pictorial spaces comprising layers of glaze, closed yet seemingly open, simultaneously flat yet endowed with depth. They are strangely liquid compositions in spite of their linear, spatial interior form. They lack any immediately apparent painterly gesturality, presenting most emphatically the genesis of their formal shaping. Even if they appear abstract, they suggest that they are a reproduction of something that remains undefined but tangible nonetheless. The most apposite description for this ‘something’ would be the German word Gebilde (construct, form), which, significantly, contains the stem Bild (picture, painting, image), yet refers to something non-specifically figurative; indeed, it also refers particularly to the fact that this is the result of an action. Paint is applied in layers to the canvas, thereby giving rise to a certain spatial depth, which tends to disappear when viewed from a different position. Ute Müller’s paintings are arranged in such a way that they change depending on the viewing angle and how they have been illuminated. To a certain extent they think about their own presentation from the outset, positioning themselves in relation to the imaginary space in which they are meant to come into their own, or towards the wall upon which they will hang. It is impossible to think of these canvases in frames of any sort, for the boundary or delimitation that a frame necessarily engenders would not only attenuate the individual painting’s object character, but it would also confine the energy of the fluid colours fixed within it to the detriment of the work as a whole. I like the cool colours of these paintings, their blues and greys and the metallic nature of their chromatism. Presumably these colours are the reason behind the attribute “minimalistic”, a term which some people use when talking about Ute Müller’s painting. Actually, it would be more fitting and call it “maximal” painting that comprises layered gestures and lineaments made out of suggested forms and crackles that have almost been made to disappear once more. One might pick up a distant echo of surrealist experimentation or the compositions of Tachism transmitted from beneath the various layers of paint, but which has all but dissipated by the time it reaches the surface of the canvas. As in the case of the sculptural works, this echo implies both reference and historicity: knowledge about the past which needs to be processed further in order ultimately to create something that wants to and will remain ambivalent, very much in the Valéryan sense of the word.