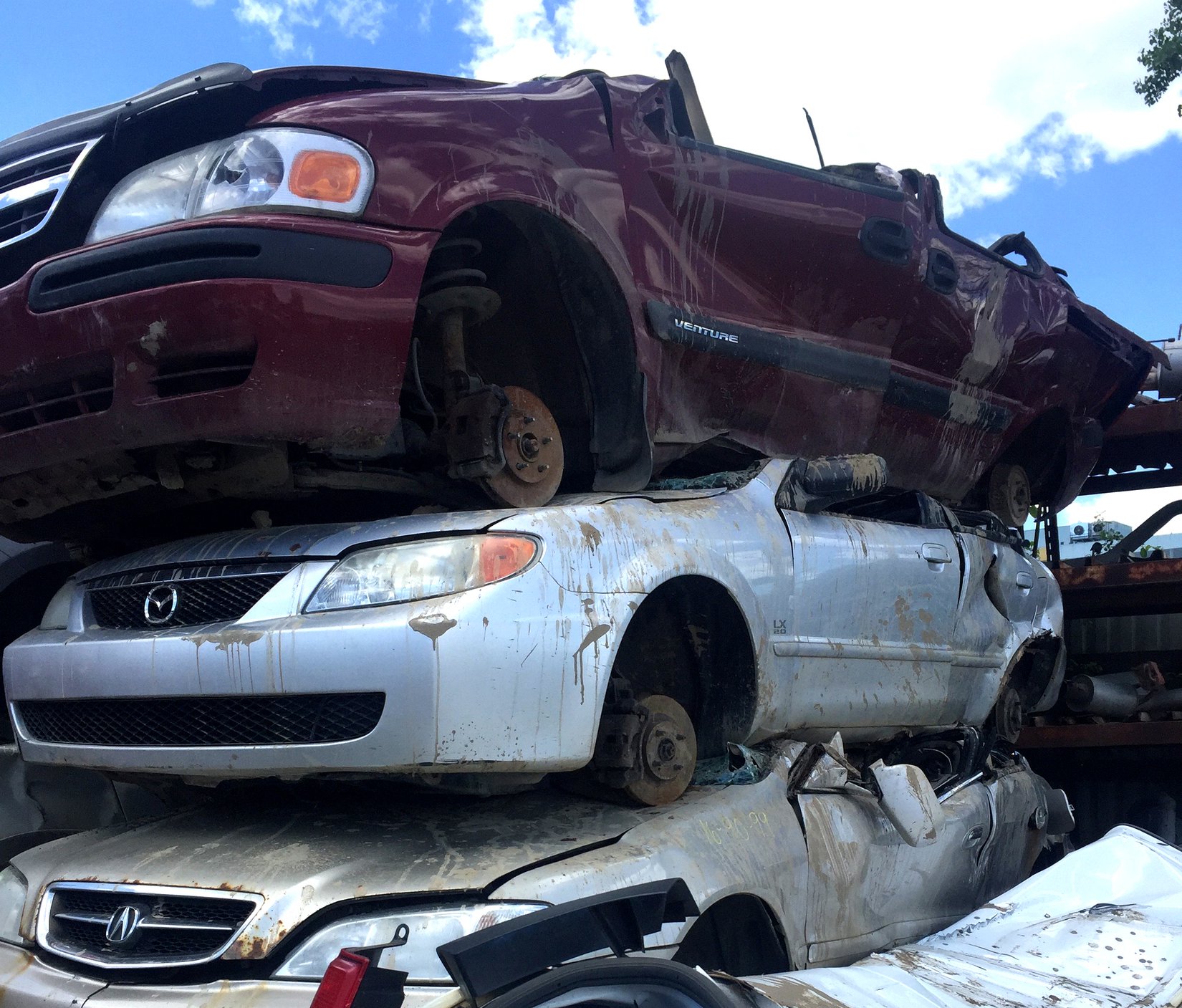 In the beginning, there was, once again, the car. Or, to be more precise, a photograph of four sports cars. Hannah Perry shot the picture with her mobile phone, in 2016, during her stay in Montreal. The artist was developing new works for “I feel we think bad”, an exhibition about the meaning and reception of networks in current art at Arsenal art contemporain, a privately-run art centre. Apart from Perry, also the British Ed Fornieles and the Canadian Matt Goerzen participated in the show. For the exhibition in Montreal, Perry used a framework structure to present her blurry videos and prints that derived from her picture archives. The car as subject as well as material emerges particularly in two places: for her work “Good vibes/bad vibes”, the artist had covered free-standing framework displays in silver car wrapping foil, which were set into vibration by the bass coming from the subwoofer speakers that were attached behind it. Furthermore, Perry made spatial sculptural works out of dented and crushed car parts that had been completed with a gestural application of paint in an additional step - as aestheticized junk heaps.

A junkyard is also the place at which Perry took the aforementioned photograph. The four cars depicted have already been cannibalized, the tires removed, the roofs torn off, their formally glossy and delicate surfaces are damaged and lacklustre. Stacked in a space-saving manner, they are waiting to be scrapped. They are discarded, damaged shells, but despite their mutilation, they also evoke hostility and aggressiveness - by way of the perspective the photograph was taken from: at an angle from down below.

It is this area of tension between vulnerability and toughness, between desire and rage, which Hannah Perry addresses once more in her first institutional solo exhibition “Rage Fluids”, presented at the Künstlerhaus, Halle für Kunst & Medien in Graz. The references to the materiality of sports cars and the connected range of associations, such as masculinity and fetishization, which become highly comprehensible in the exhibition, could already be found in the first works she created at the prestigious Royal Academy Schools in London, between 2011 and 2014. But they are based on a formative memory that dates back further. Perry was born and raised in Chester, in the North of England, as a working-class child. Men are usually welders or steel workers; the sons follow in their fathers’ footsteps. But particularly the young men, who race through Chester in their pimped-up cars with booming bass constitute a memory that stays with her. Some of them appear to love their cars more than their girlfriends, whom they have placed on their passenger seats.

At the theory-laden Goldsmiths College in London, Hannah Perry starts to deal with texts on gender issues and fetishism and graduates in 2009 with a BA in fine arts. She strives to increase her understanding of the experiences she made as an adolescent in Chester. These memories become eventually the key material for her works. She experiments with collages first, then she works with video, sound clips, found images, and objects. Instead of using the brush and creating imaginary painted worlds, she combines found and recorded material and follows an aesthetic of the raw and unfiltered, which she emphasizes by adding further damage. She works especially on the relationship between personal experiences and their representation that are communicated via the current channels to the outside world. For her as an artist, the question arises, how to make her identity apparent in her art, the tension between vulnerability and display, between her own needs and their representation on social media.

With “Feeling It”, a sound sculpture that she presents in her final show at the Royal Academy Schools, she found a form of expression she will continue to use in the following years. For this work, the artist developed a rectangular, flat steel frame, which she subsequently covered with silver car wrap foil. The bass beats of the subwoofers that are attached to the back set the foil in constant vibration. And not only the sound waves do affect the body - especially the reflecting foil surfaces let the viewers of the installation see how their own reflections are set in motion.

For her show in Graz, four years later, Perry applied the technical principle of “Feeling it” to a site-specific sound installation. While she had previously, in Los Angles and for the aforementioned show in Montreal, extended variations of this work further and further into the space - thus putting an emphasis on the sculptural qualities of the work by disclosing the rear - for “Rage Fluids” she developed an ensemble of installations especially tailored to the architecture of the Künstlerhaus.

The fixing of the three parts of the work by way of thin steel ropes - the largest of which has a length of 20 m - that meander through the 21 x 14 m measuring exhibition hall, led to the fact that not only the bass beats coming from the subwoofers seem to be floating through the Künstlerhaus, but the entire work itself hovers in the air. Perry decided, furthermore, to use a car wrapping foil from the luxury segment in ‘chrome rose gold’ for the first time, with the effect of adding an aura of refinement to whatever it reflects. The bass beats from the subwoofers set the diaphragm of car wrapping foil into widespread vibrations, this time with an additional emphasis on the creation of distortion.

Hannah Perry titled the installation in the large exhibition hall “Shock Absorber”, and thus related it directly to “A Soft Shock”, her first 360°-film, presented in the apse. In the film, elegant shots of apparently free-floating body parts of different genders alternate with material from Perry’s archives, in which the familiar aesthetic of her demolished mobile phone videos becomes tangible. They are scattered with text passages and interrogative clauses like “Not a bad body in my bone, a body blow, beach body ready“ or “How many calories does crying burn?“ The viewer is surrounded by the footage and able to submerge into the fragments of the artist’s way of thinking and feeling. “A Soft Shock” is based on a 14-paged script written by Perry that is interspersed with immediate emotional outbursts and accusations. The - at times - intimate and personal articulations can be followed via the film’s voiceover. It remains unclear if these statements refer to the end of a romantic relationship or rather to the loss of a loved one.

While ‘A Soft Shock’ focuses on Perry’s personal experiences since 2015, the wall pieces produced for the exhibition, with titles such as “Spoilers”, “Grills” or “Mechanism”, again have a stronger reference to the subjects ‘car’ and ‘masculinity’. In the works on reflecting aluminium plates, for which materials such as car wrapping foil and car paint are combined with digital and screen prints, Perry’s beginnings with collage techniques are still clearly evident. But Perry also introduces techniques of décollage, by vigorously tearing off parts of the previously applied materials. The origins of the image patterns she used are hard to identify. Are they - just like the half open mouth of the blonde in ‘Liquid Language’ that has melted into a cliché of masculinity - taken from an advertising campaign of a men’s magazine, or do they come from the selfie-archive of the artist? Both would be possible. The gestural colours of these works contradict not only the printing techniques used. In the history of art, the brush stroke was commonly regarded as an expression of artistic individuality. In the American abstract expressionism, it was eventually idealized as the signum genuine of male genius. Thus, the pointedly vigorous splatters of car paint combined with the other materials from the car tuning sector can be read in the context of exaggerated ‘references to masculinity’. However, the text fragments in these works such as ‘Sex Dreams in which I am perfect’ or ‘My neck, my back, my Lipitor and Prozac’ have a biographical background. They can also be found in the 360°-film “A Soft Shock”.

Text passages from “A Soft Shock” were also used in the performance “Rage Fluids” that Hannah Perry showed at the opening of her exhibition in Graz. Here, four performers expressed the central subject of the exhibition - the tension between attraction and rejection, between desire and rage - through a variety of constellations.

Hannah Perry’s art oscillates between the grand entrance and great poses on the one hand, and the delicate presentations of vulnerability and intimacy on the other. Perry comes from a generation for which Myspace was left behind by Facebook, and images are sent via WhatsApp and presented on Instagram. The artist uses social networks to communicate her lifestyle and personality. Moments from her everyday life are saved on hard discs and SD-cards, in order to use some of them as image motifs in her work when needed. In her artistic practice, Hannah Perry works, first of all, intuitively and keeps the old myth of the artist’s creation originating from her/his innermost thoughts alive. However, the fact that Perry uses her own personal experiences in her art makes it particularly contemporary. Hence, subjects, such as feminism or the role female artists could be playing in the art market of the 21st century, become apparent. But Hannah Perry’s art is not limited by any boundaries.