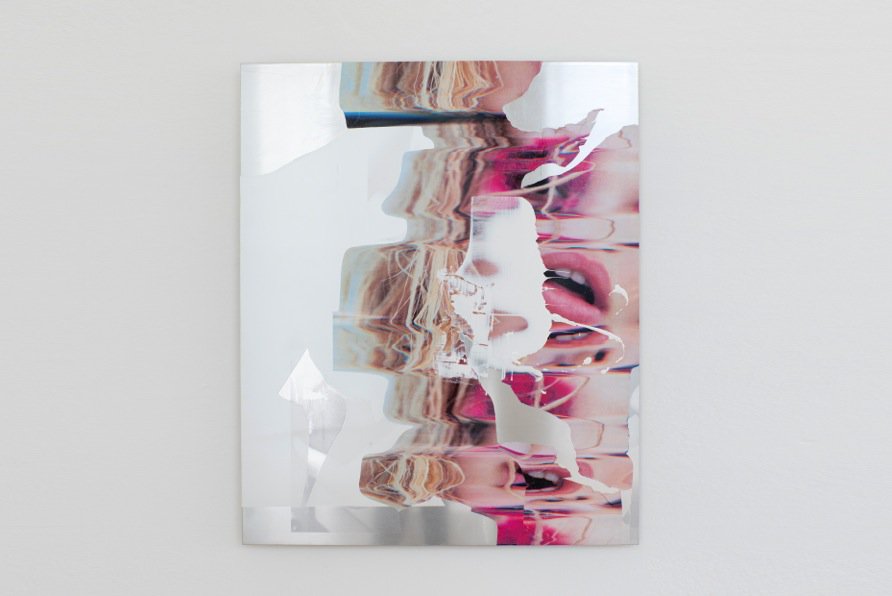 British Curator Cairo Clarke on how she met Hannah Perry, her thoughts on Perry’s practice, exploring the fragility of sanity in contemporary culture.

I first met Hannah Perry at her studio on Rye Lane Peckham in 2016. The space used to be a butcher shop, the pungent smells of fish, meat, fruit and veg leaked from under the old red corrugated shutter of which you entered from the busy main road. The space was vast, work hung and pegged like clothes on a washing line, screen printing tools in one corner, layers of shiny iridescent materials strewn on the floor, scaffolding poles and metalwork in another corner. Her artistic presence was laid bare and the act of doing so made this space the perfect sharing space for peers.

Alongside making work, Hannah Perry hosted Sadface Sundays, a space for friends and newcomers to get together, listen to music, get tarots read, read horoscopes, drink chai, eat popcorn and ultimately know you had a system of people around you that get it. People that feel similar to you even if you can’t figure out exactly what it is or why you’re feeling that way. A space to talk about mental health without directly talking about it, but feeling a collective sense of compassion. This is how I first met Hannah. It seems important to bring up those Sundays in the studio in relation to writing about the context of her work and artistic practice because Sadface Sundays, (it’s collaborators, events, attendees – who soon became friends) was an honest space to deconstruct, address, and explore fragility, an exploration that exists throughout Hannah’s current and previous bodies of work.

Triggered by the loss of her best friend, Hannah’s previous body of work explored the ways in which emotions are gendered by societal tropes, the “hysterical female”, the “car crash relationship”. The work responded to and came out in guttural responses to loss and anxiety, framed like a relationship breakdown. The events were all too fresh, the bodily and emotional responses too immediate, the communication all too constant, and the need to be in control too strong to process experiences of anger, rage, grief introspectively, instead falling victim to it. This idea of being “female” and being a “victim” highlight patriarchal narratives and stereotypes that further muddy and confuse the ability to express emotions without being negatively characterised. At this point in her practice it feels like there is a lot of figuring out to do. Through the work, its myriad of voices, materiality and levels of engagement, Hannah honestly and openly explores the complexities of such “figuring out”.

Moving to present day, Hannah is now based in Somerset House Studios in Central London. The environment for making work has changed and in some ways has alleviated the very immediate connection of place and a time to develop a body of work concerned with the ways in which our hyper-social, technological lives inform the way in which we process loss, grief, trauma. Through personal experience, research, and collaboration, Hannah creates a body of work that deconstructs and demystifies the “shallowness of sanity”.

The bombardment of images and communication of which we are constantly at mercy to respond to or desire, result in further detachment and alienation from emotions and bodily expression. The work uses visual imagery and language from memory, social media, memes, and advertising that contribute to the constellation of our everyday lives to form the basis of a script central to the work. Hannah explores the Western obsession with control and containment and compares it to her experiences in Varanasi, India, where she spent time writing the script. Whilst the work isn’t about India or Hinduism, experiencing the way in which grief and death is dealt with in this culture seeps into the work and is embodied through the use of repetition with an almost meditative quality. There is a slippage in the script between mantra and madness. By creating non-linear narratives, the use of multiple voices chattering, taking on different pitches and tones illustrates the internal dialogue we may all be familiar with suppressing, whilst also highlighting the performance and negotiations of day-to-day communication.

In Hannah’s practice, she explores how we have been socialised into systems of behaviour and societal norms by asking us how and why we favour management of self to maintain stability, productivity, and reliability, and for whom? What happens when we subvert these notions of control and reject hegemony?

This subversion of hegemony also reflects the way Hannah works, forming collaborations and methods of exchange in her practice, most recently with the London Contemporary Orchestra, and young drama students from London South East Colleges. Hannah sees value in different voices and experiences and how these collaborations and interactions inform the development of a body of work. By giving voice to others – the child like and the adult – our journey through the work is not individualistic or hierarchical but a collective exploration into the constellation of everyday encounters that effect us.

Hannah herself is not visually present in the work yet presents herself through forms of common imagery, sound, and choreography, creating a movement language we recognise and attribute to our own experiences. Music videos, youtube clips, lyrics, advertising slogans are interspersed with her own streams of consciousness. A spectrum of emotion and expression is created through a brain-chattering script that offers a counter narrative to the age of self-help books, sub narratives, and methods of self-care. It’s ok to not be okay.

This sentiment is illustrated further by thinking about how the body is represented in the work. The body as a vessel, the body as archive of experience, memory and emotions. In order to become a vessel with agency, the body is explored rhythmically, and viscerally, pushing it to limits in order to release energy, to desensitise, whilst at the same time highlighting that the body is also just meta - as Hannah witnessed first hand during her research trip to Varanasi. The body as meta is explored more directly in sculptural works such as GOOD VIBES / BAD VIBES (2016) and Shock Absorber (2018) by focusing on how the body takes in trauma and rendering it physical. Again the tension between control and release it toyed with through the works that ripple and warp until your sense of self and reflection seem somewhat distorted.

This relationship between the body and the ‘car crash’ is often revisited in her work. ‘Car crash’ is a term that can be used to describe a disastrous situation or way of behaving, most commonly associated with women. The material and physical connotations of a car often slip between strong, stable and safe to that of the ‘car crash’ personality and it is this juxtaposition that Hannah explores. Using language and materials in her sculptures, installations and moving image that embody the fragility of that moment of negotiation before the car crash. Calling to question what it means to maintain or lose control?

Throughout her practice Hannah highlights this dance of negotiation, of control and release, this constant navigation of space that we to and fro, tip toe across and get thrown through. A dance of negotiations that means we have to be adaptable, responsive and hyperaware throughout in order to maintain control and avoid exhaustion. By reimagining systems of gender representation and deconstructing the fragility of sanity in relation to our hyperconnected lives, Hannah warps perspectives and identifies the tension between ‘car crash’ and perfect poise to see beyond binary forms of expression and emotion offering a more kaleidoscopic, visceral approach.