A walk through our current exhibition "Hate Speech. Aggression and Intimacy" with photos by Markus Krottendorfer. 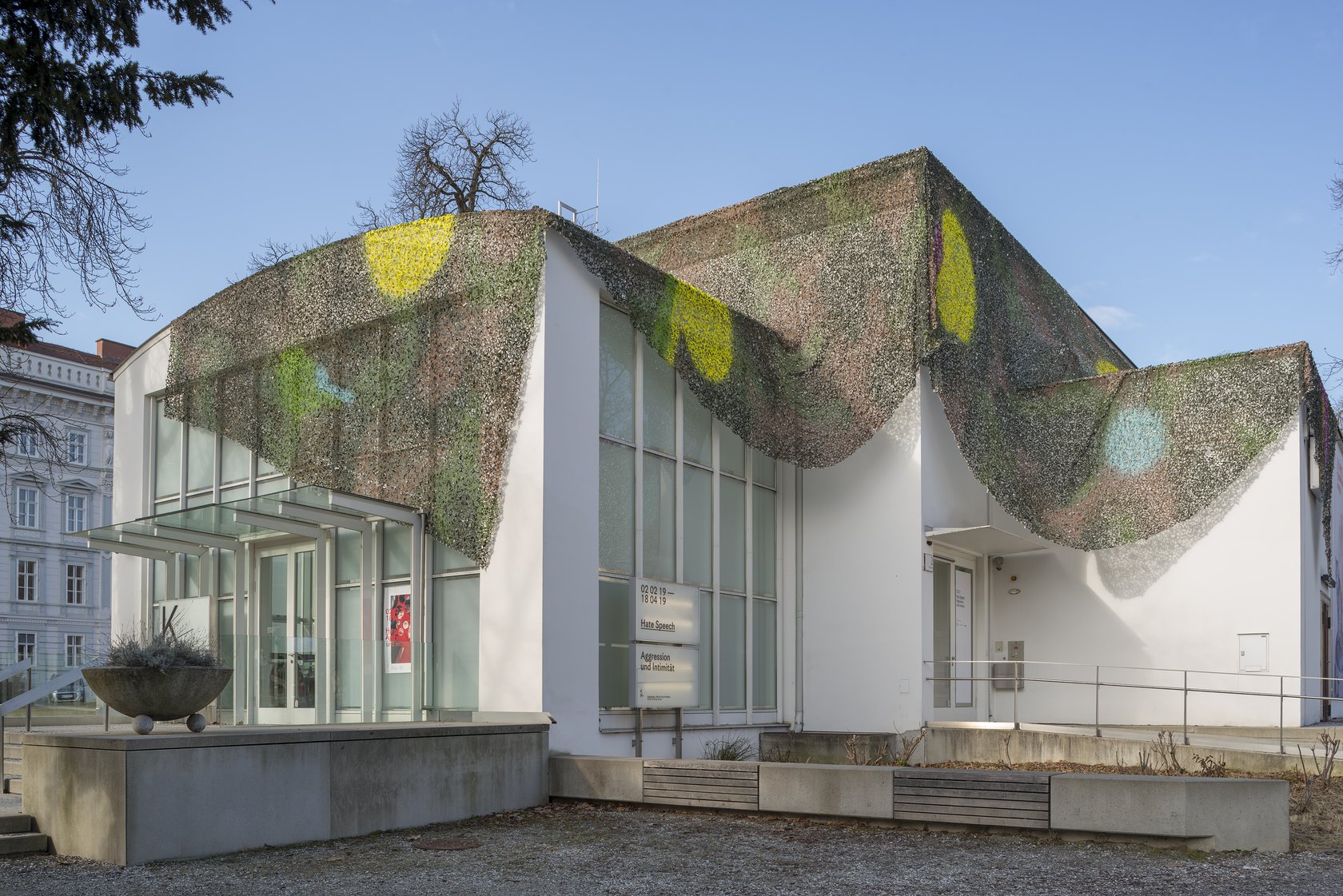 As part of the exhibition Hate Speech: Aggression and Intimacy, Thomas Baumann (*1967 Altenmarkt, lives in Vienna) is making the Künstlerhaus disappear under a 270 m2 large camouflage net. The multifaceted creative activity of the Austrian artist repeatedly involves moments that challenge systems of value and form. Paint Balls – Shots of Reflections (2010) inverts the original purpose of camouflage into its opposite. Instead of covering, the net serves to highlight: bright spots of color overlay the surface and de-camouflage the building. Neon-colored traces reminiscent of the team and combat sport paintball allude to massive bombardment from all cardinal directions and turn the structure situated at the edge of Graz’s city park, not far from other public representational buildings, into an eye-catching public event. 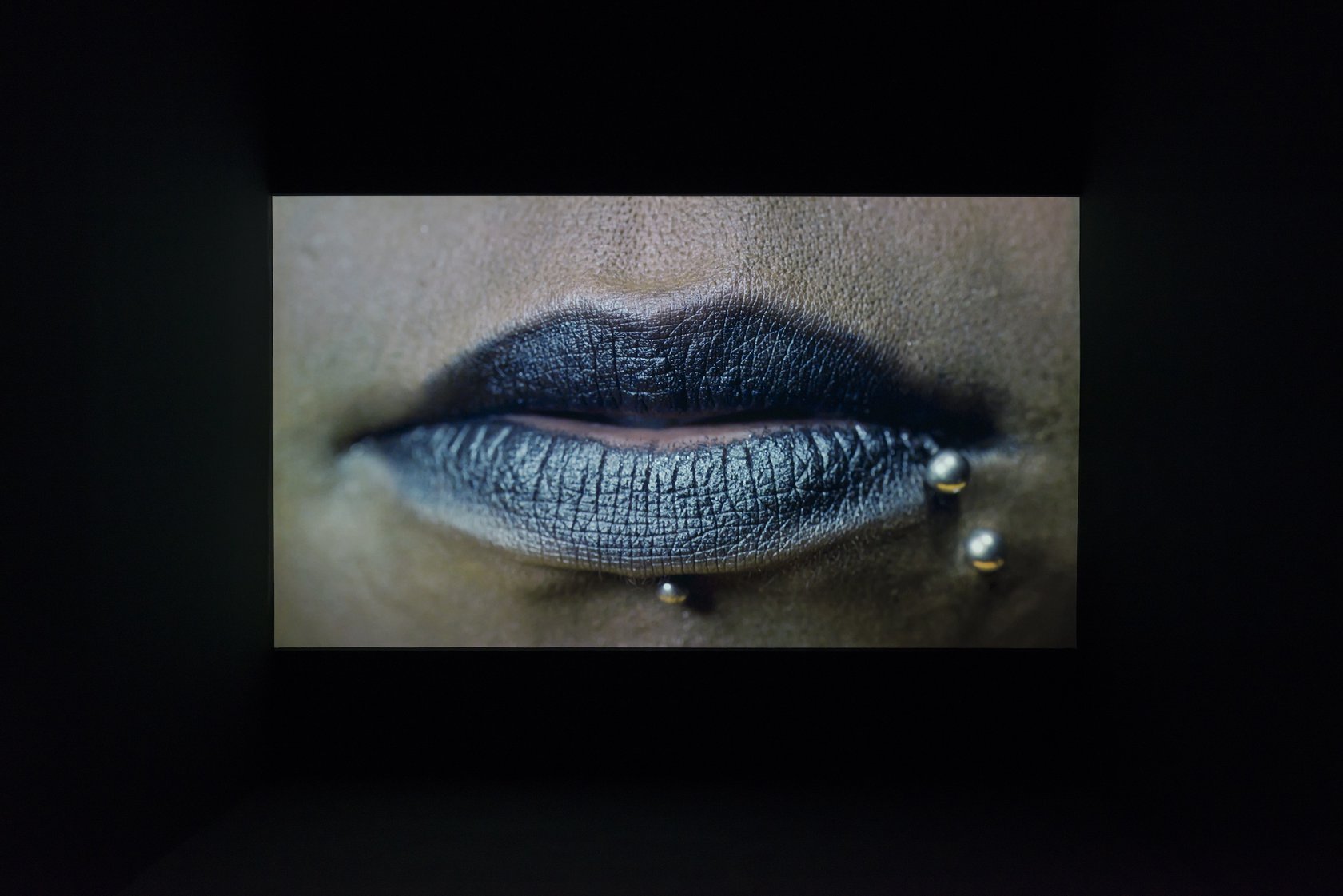 The South African artist Candice Breitz (*1972 Johannesburg, lives in Berlin) focuses in her work on the meaning of media in the development of individuals or groups. The installation Sweat (2018) shown at the Künstlerhaus is a work accompanying the thirteen-channel video installation TLDR (2017), for which Breitz conducted interviews with activists from the organization SWEAT (Sex Workers Education & Advocacy Taskforce in Cape Town, South Africa). Sweat presents excerpts from this comprehensive research project and functions as a megaphone for a chorus of African sex workers. The camera is focused on the lips and thus also on the language and pronunciation of the ten interview partners (one man and nine women), who one after another—each in statements with a maximum of 1,400 characters, the length of ten tweets—talk about their work, its conditions and value, and the associated prejudices and emotions. 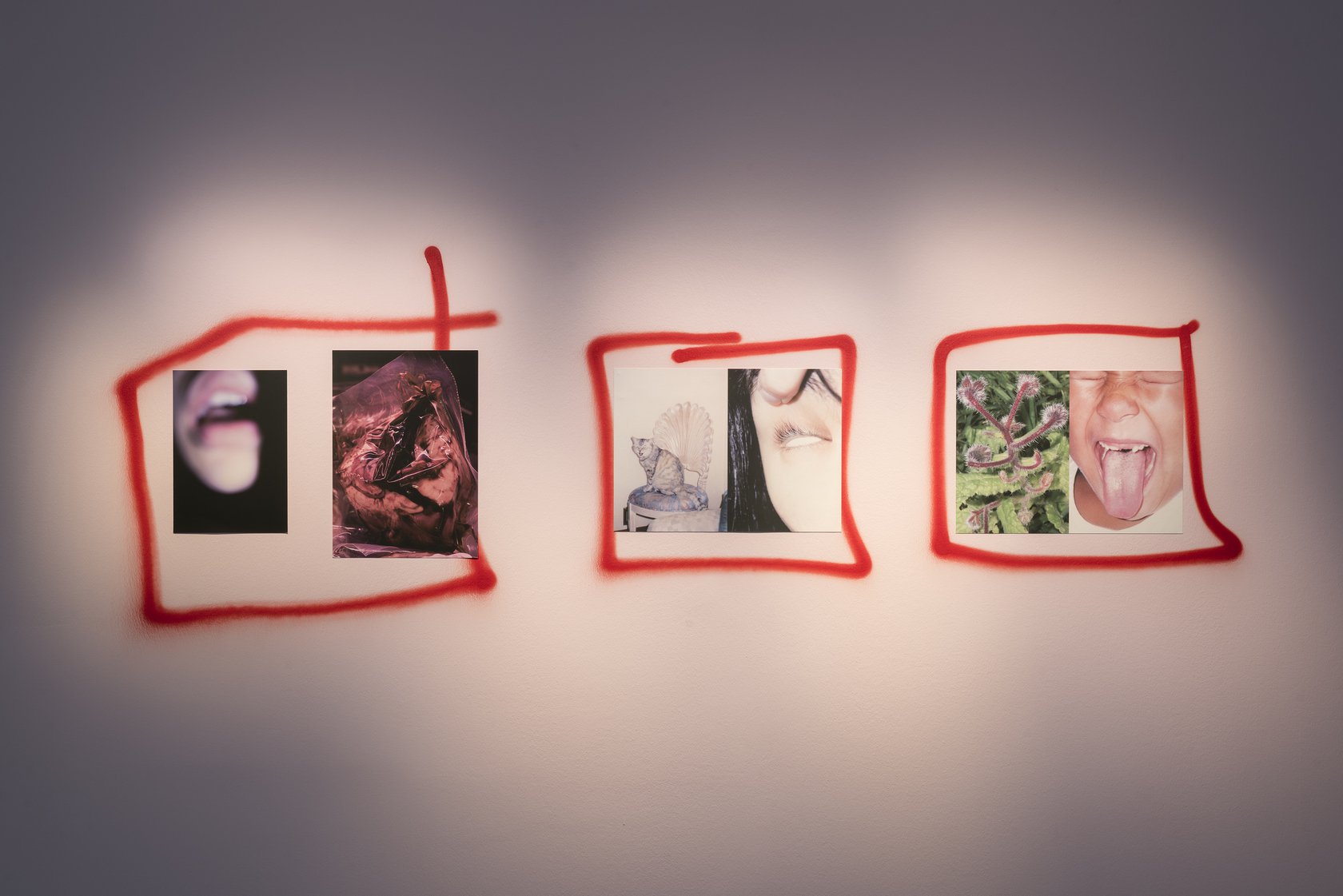 In her installations and books, Elena Aya Bundurakis (*1988 Crete, lives in Athens and Antwerp) combines and varies mainly photographs, but also drawings, videos, and haiku poems. Her motifs involve shots of fragments and details from her everyday life. In this respect, the artist takes special interest in the composition of biological organisms and of her own body. Arising here is a visual cosmos which—nourished by dichotomy and a play of aggression and introversion—triggers emotional chains of association in the beholder. Featured on the exhibition’s invitation card, the work Yawn / Sclera I (2016) originates from the series Looking for Summer in the Middle of My Adulthood (2015–ongoing). For this series, the artist illuminates the roots of her adult self and combines early photos from her parental home with references to her present-day reality. 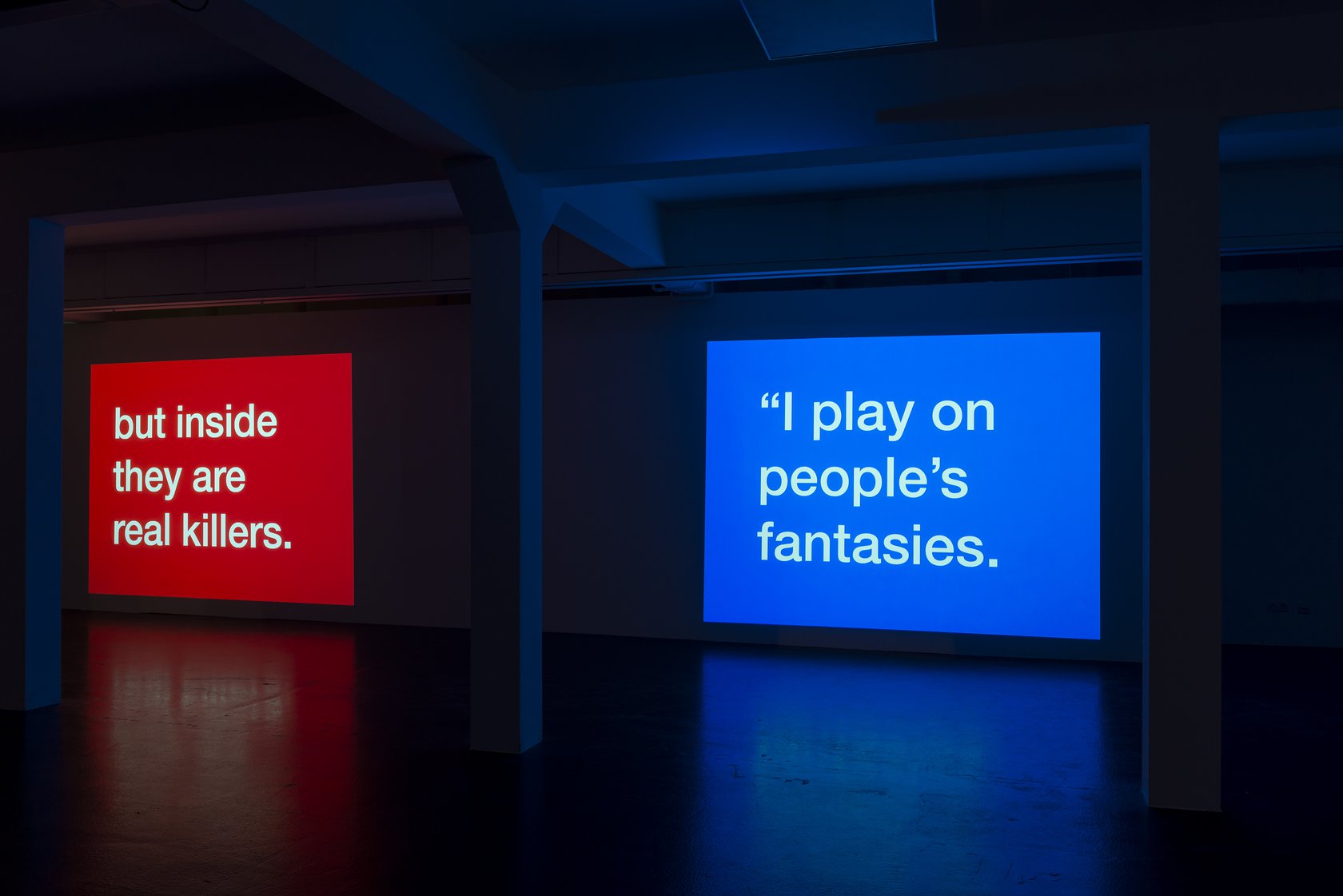 Evil series is a project running since 2001 by the media artist Tony Cokes (*1956 Richmond, Virginia, lives in Providence, Rhode Island). It is devoted to the US war against terrorism and scrutinizes the related coverage by the mass media. Cokes—who has attained international renown through his video works, which combine animated texts, monochrome foils, and pop music—does not unveil any hitherto unknown and sensational facts in his Evil series. Instead, he presents to his audience the monstrosity of that which is already in the public domain yet has remained unheeded. For Evil.66.1 (DT.sketch.1.8) (2016), the artist compiled lurid quotes by Donald Trump—found in the media prior to the 2016 United States presidential election—to create a text collage on the topic of bigotry, and most especially misogyny. 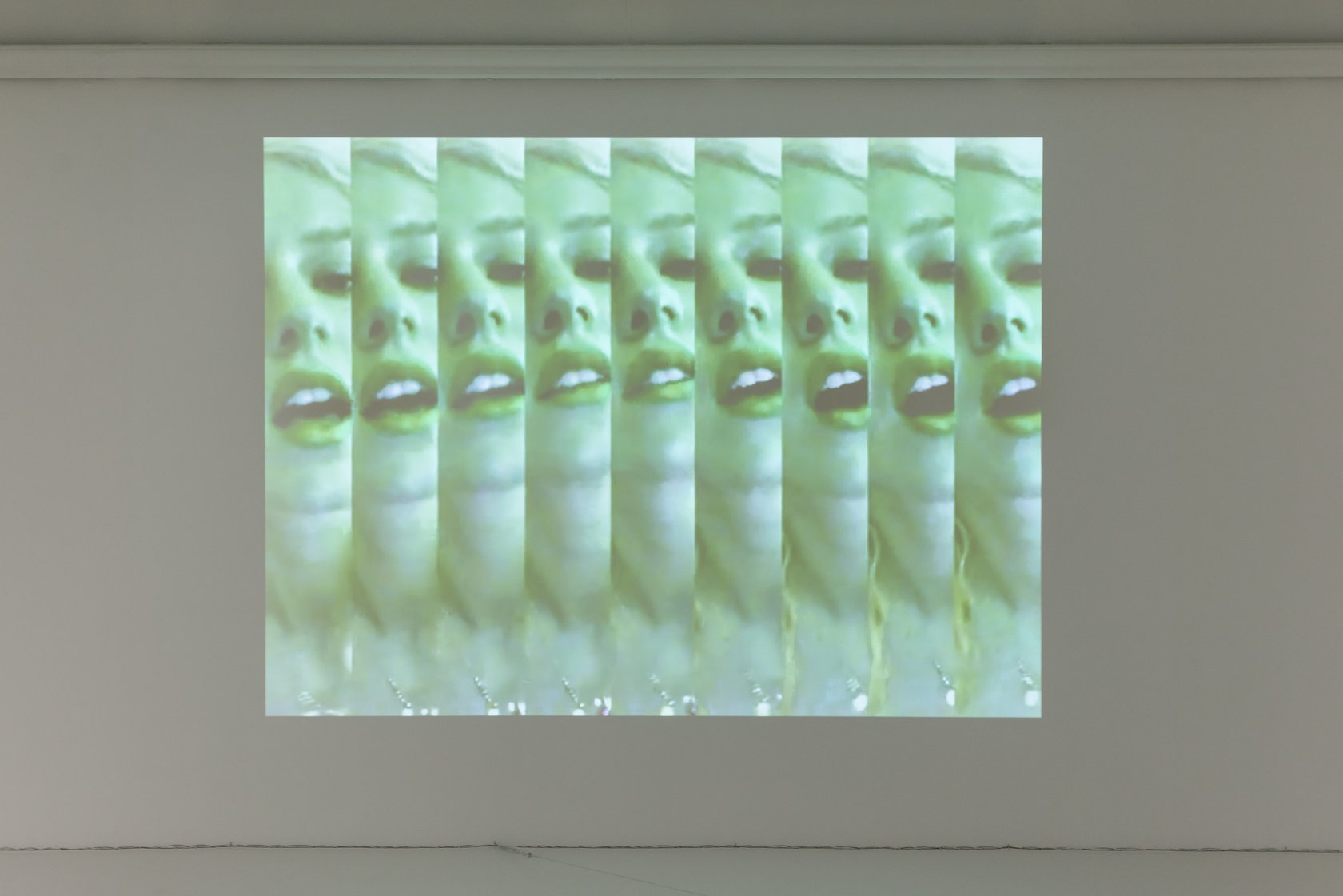 Petra Cortright (*1986 Santa Barbara, California, lives in Los Angeles) herself is the only protagonist of her video contributions to the Internet platform YouTube, which are well known beyond the art world internationally. The American artist works in the areas of video, painting, and digital media. Evident throughout Cortright’s creative work is the act of exhibiting and questioning her own self-image, which is distorted by the many contemporary animation effects and technical filters. Among the ten filmic works by Cortright shown successively in the exhibition as a loop is the video bridal shower_w_rose (2013), which has already been broadcast on American television. Aside from probing the changed self, altered through the possibilities presented by the Internet, the video also thematizes the contributions by and experiences of the audience. 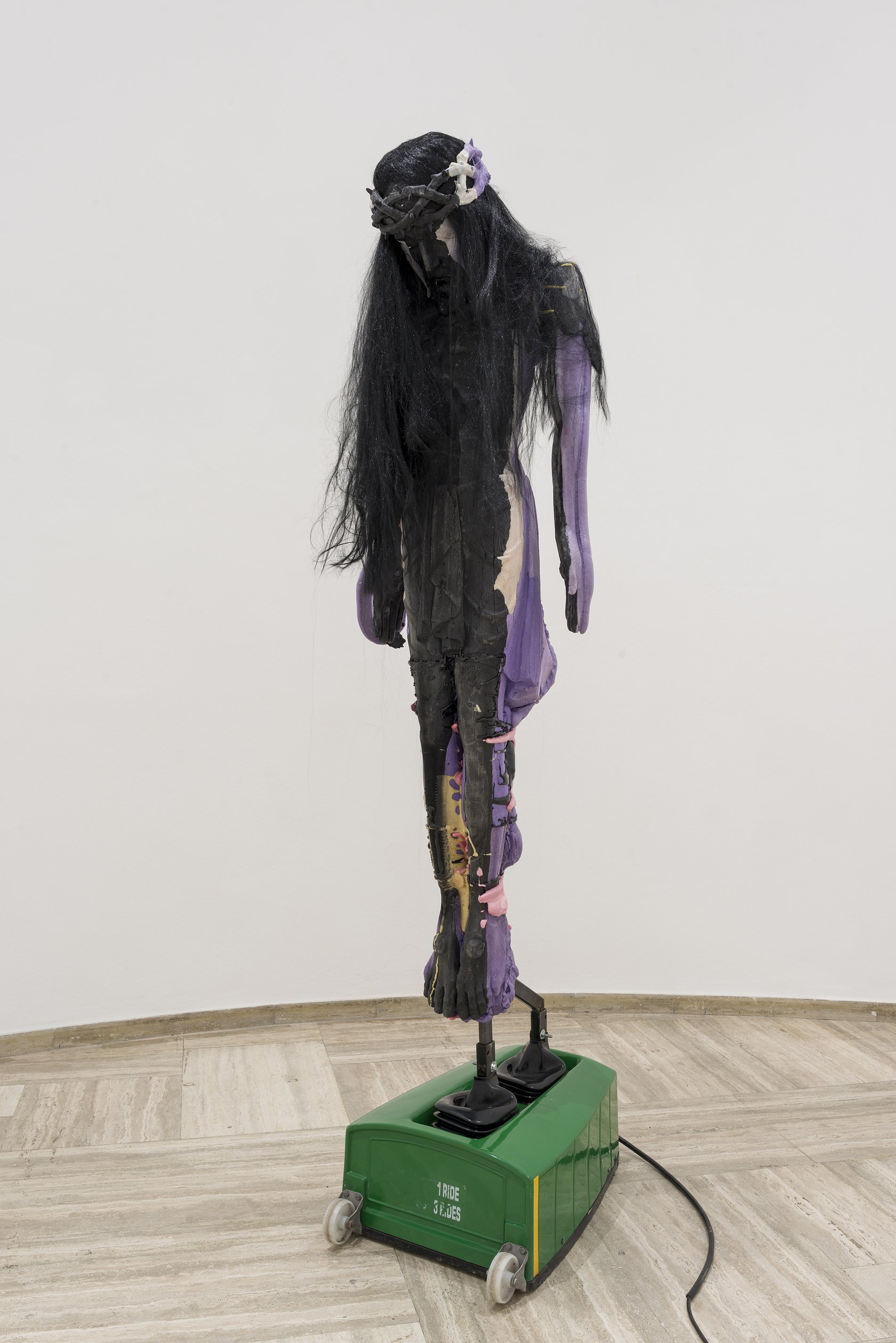 The artist Folkert de Jong (*1972 Egmond aan Zee, Netherlands, lives in Amsterdam) is known for his theatrical, narrative tableaus that deal with war, greed, and power and that embed historical figures in a contemporary context. The title of his three-part work Golgotha (2018), with three powerful figures made of polyurethane foam, references the hill of the same name outside of Jerusalem on which Jesus of Nazareth was crucified. Despite the clearly identifiable iconography of Christ—the dangling corporeal posture, the nailed hands and feet, and the crown of thorns—the scene seems more apocalyptic than religious. Through compulsive and fruitless verbal and machine-like physical repetition, de Jong’s triptych is reminiscent of Gothic demons at an Alice Cooper concert and encourage us to think about which concepts of faith and historical awareness define our present. 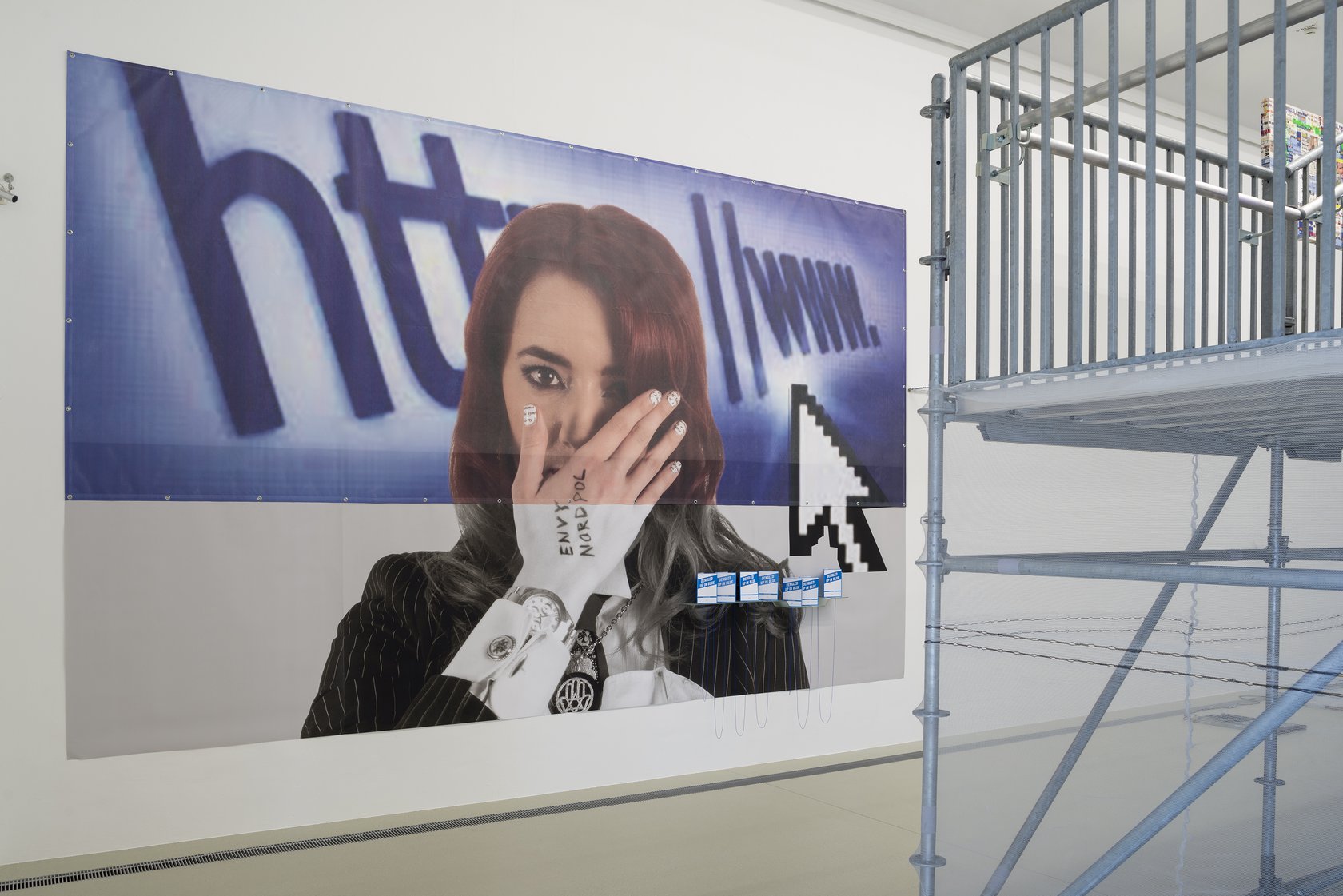 The larger-than-life portrait U want a piece of me? (2014) by Verena Dengler (*1981 Vienna, lives in Vienna) questions the blurred boundaries between public and private space on the Internet, not least referencing the related labeling of artistic authorship. The artist’s evocative paintings, drawings, sculptures, and texts have a satirical tone from the off concerning what is considered good taste in the field of aesthetics, along with a serious, political nucleus that strobes, again and again, the transitions between taste of the masses and high culture. The ironic and expressive use of sensational quotes from the media is ever-present in Dengler’s artistic expression and also plays a vital role in her collage Denglisch 2 (2013). 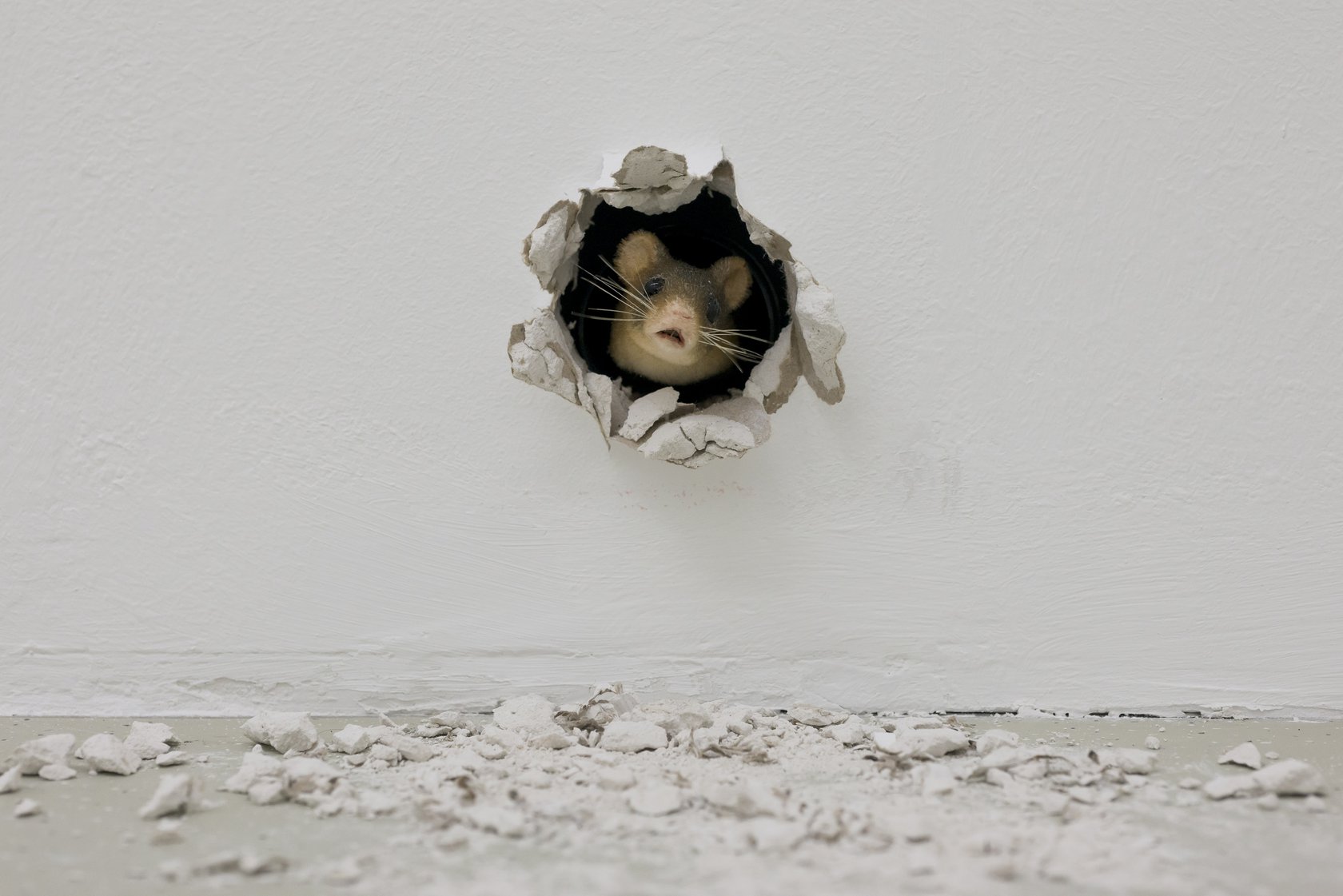 Not until second glance do we discover, in the seemingly empty exhibition space, the small mouse in the installation 2000 year collaboration (The Prophet) (2018) by Ryan Gander (*1976 Chester, England, lives in London and Suffolk). In the soft, delicate voice of the artist’s nine-year-old daughter, the deceptively real, lifelike simulation of the animal—peering out from behind an opening in the wall—delivers a nine-minute philosophical speech. In terms of content, it references the plea for humanity, justice, and world peace spoken in the last scene of Charlie Chaplin’s The Great Dictator (1940), a satire dealing with Adolf Hitler and National Socialism in Germany. References to art history, cinematography, and narrative structures are essential to Ryan Gander’s work. 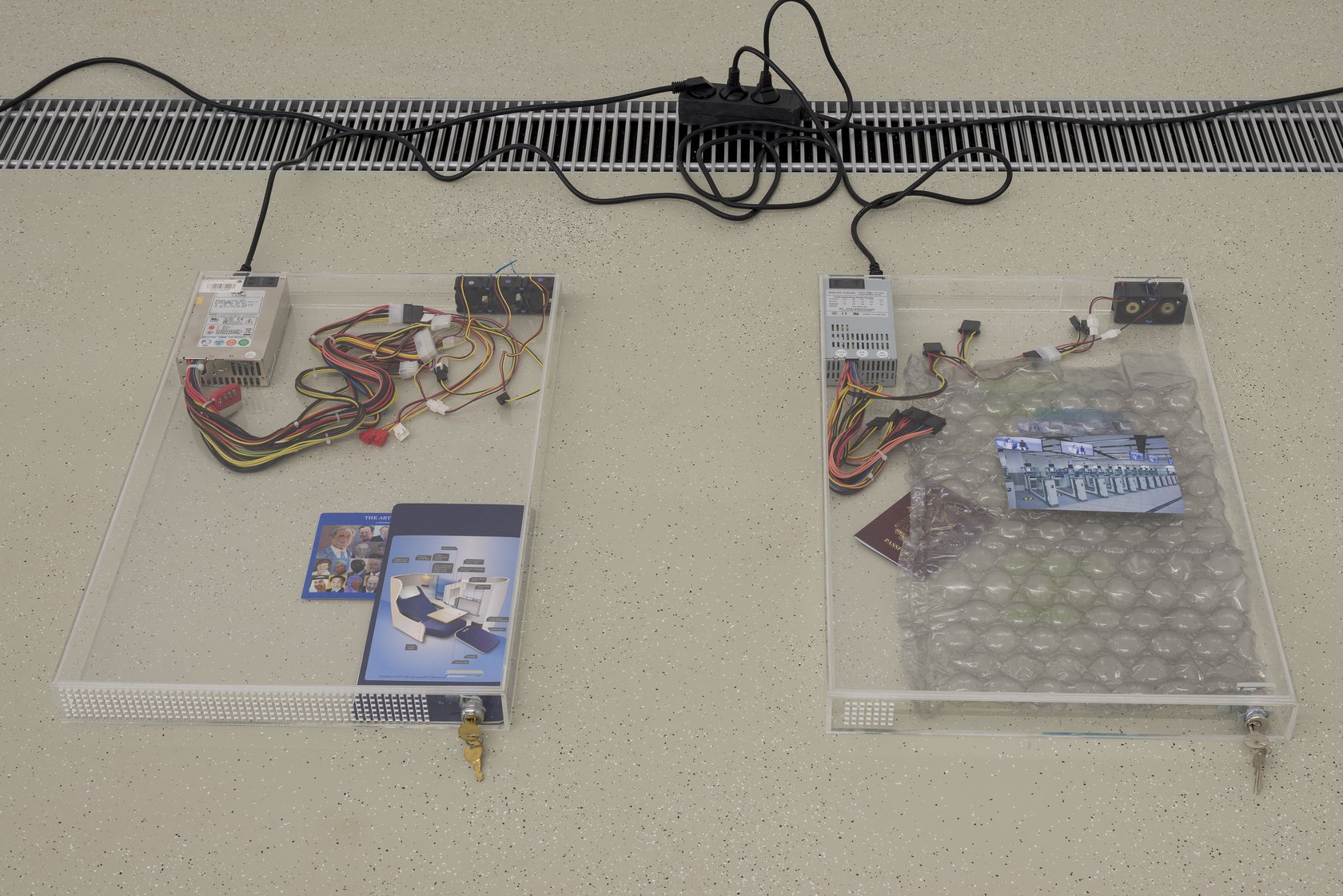 Yuri Pattison (*1986 Dublin, lives in London) explores the many relations among visual cultures, communication technologies, and the dissemination of information. Data, metadata, and a mixture of factual material, archival sources, and historical fragments make up the content of the media-based artworks by this artist from Ireland. The work peace mode (off) – context collapse (2018) is part of a complex by Pattison that investigates the correlations and contradictions between design principles and the technology of advanced co-working spaces. Extreme contemporary leisure experiences, such as the annual Burning Man Festival in the Black Rock Desert of Nevada, are included here. This work soberly presents the vision of a world, approximating well-known science fiction dystopias. 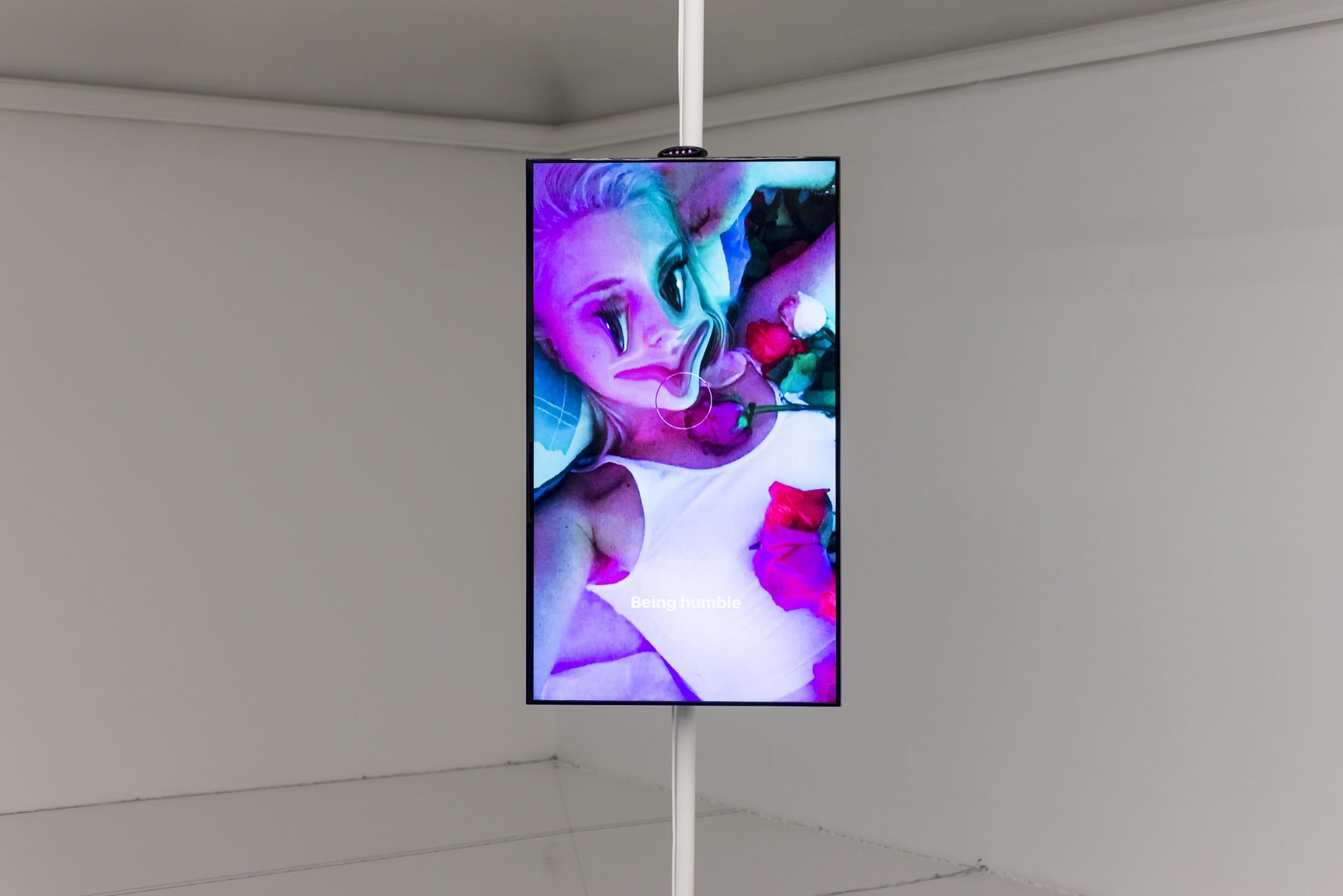 In her artistic practice, the self-declared “reality artist” Signe Pierce (*1988 Tucson, Arizona, lives in New York) probes the charged field between the representation of her digital alter ego and the perception of her analogue self. She thus touches on cyberfeminist discourses with filmic works like Photoshop (2017). The short film American Reflexxx (2015) is Pierce’s most well-known piece to date and has already accrued 1.7 million clicks on the Internet platform YouTube. The latter shows the artist walking along a party stretch in Myrtle Beach, South Carolina, clad a short dress and a mirrored mask. It captures the sometimes disturbing verbal insults and aggressive physical reactions of the passersby. The recording of the performance Performative Outrage (2018/19), in turn, newly produced for this exhibition, addresses the topic of the exaggerated expression of anger in social networks. 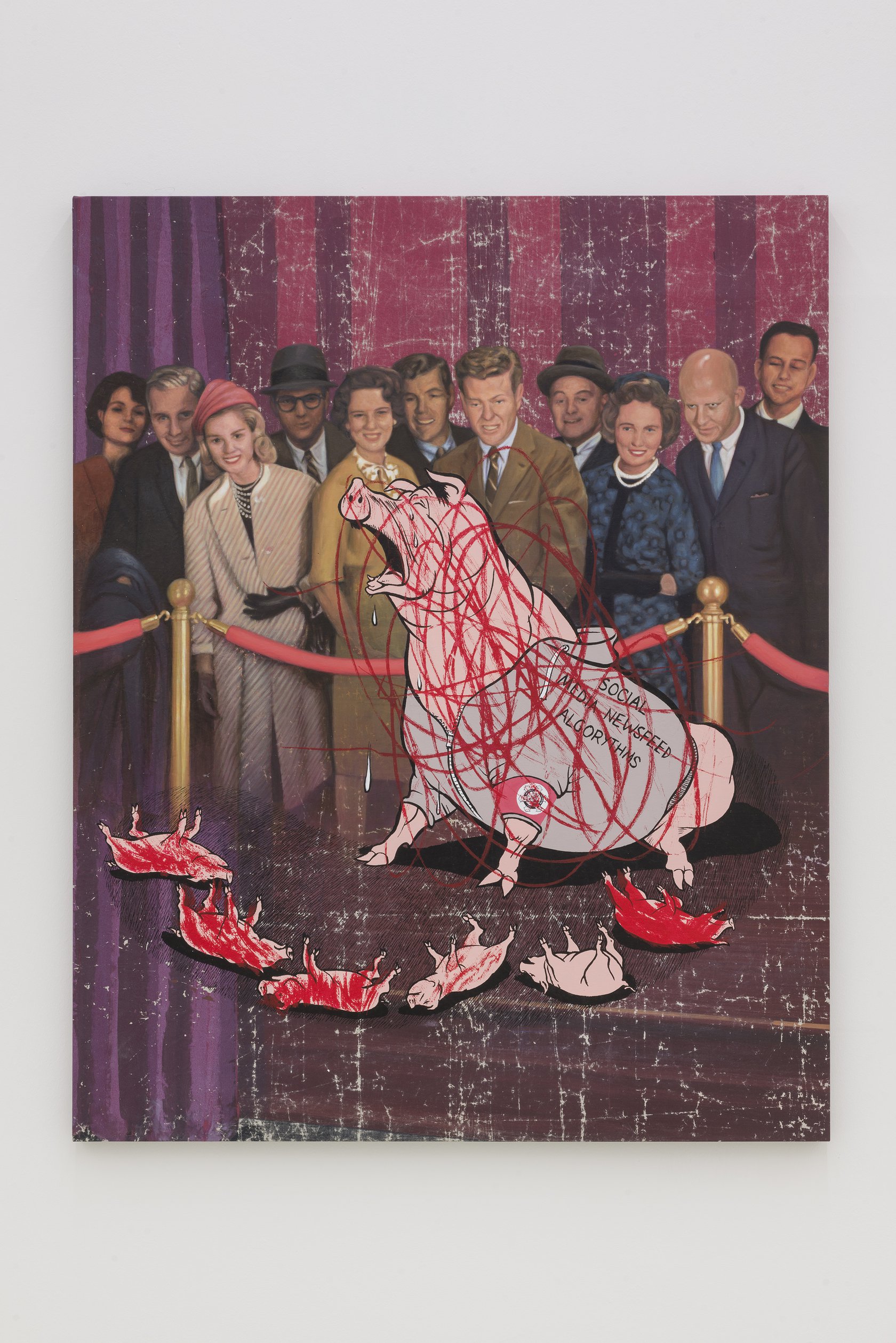 The recent works of the well-known US-American artist Jim Shaw (*1952 Midland, Michigan, lives in Los Angeles) offer commentary on the politics of his home country, especially on the US President Donald Trump. Pursuant to Shaw’s characteristic style, the drawings, paintings, and collages reflect a broad spectrum of sociopolitical, art-historical, and pop-cultural references. With echoes of kitsch, advertising, propaganda, and comics, along with the caricature of stars, politicians, and other famous personalities from public life, the artist creates a sardonic parody of US-American culture. In Tragedy Display (2018), for instance, a right-wing populist stage hog suffers the social-media death of our day and age before the eyes of famous personalities from the past, such as Jackie und John F. Kennedy. 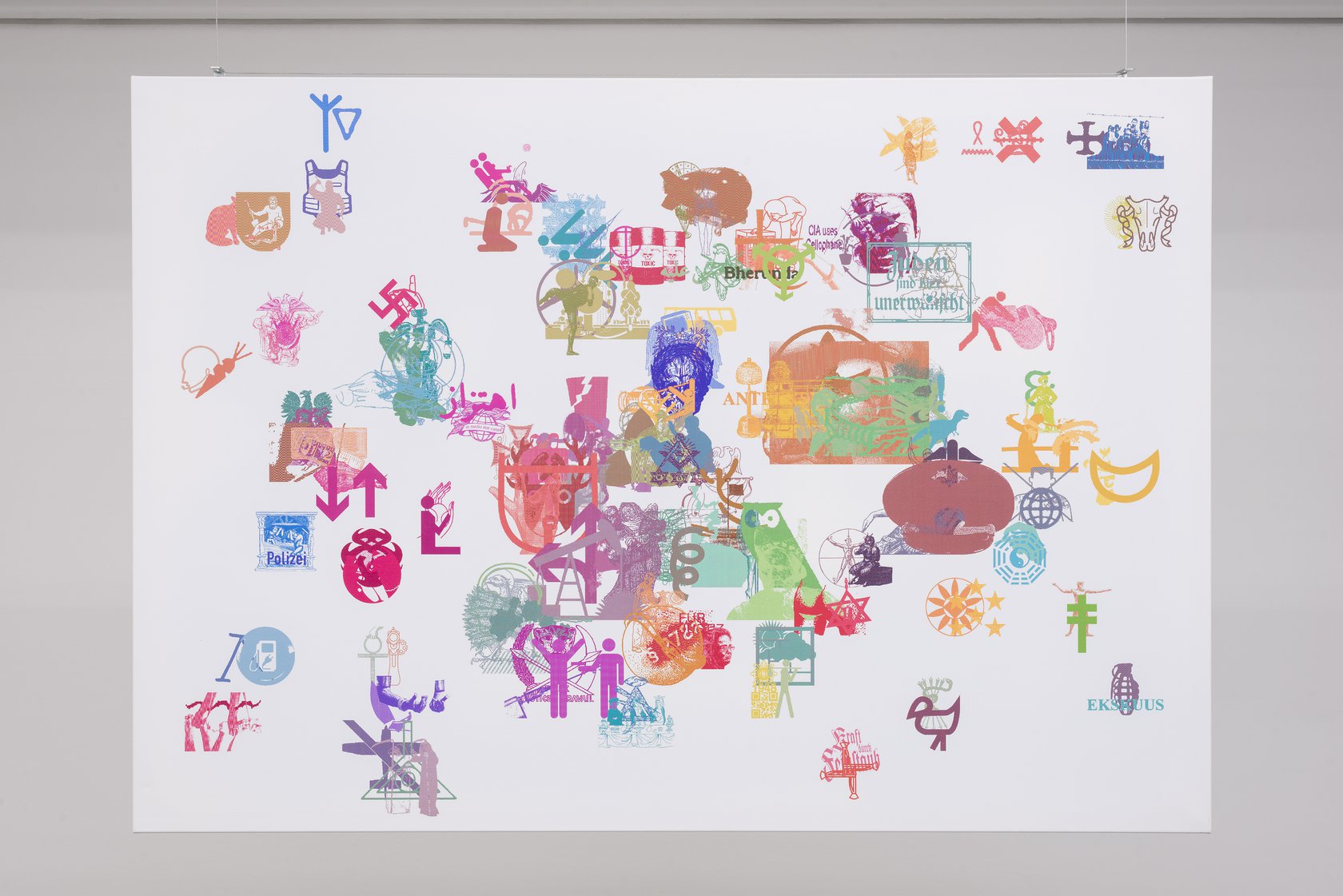 In the paintings, collages, and videos by Gunther Skreiner (*1946 Graz, lives in Graz and Seville), an irregular and diffuse compositional structure is juxtaposed with a system of clear lines and symbols. By superimposing these two determining factors, the Styrian artist has for decades been creating exciting abstract-figurative visual worlds that draw from an immense pool of pictorial synonyms and their potential combinations. With digital image series like F1102TB17_2018 (2018/19), Skreiner translates this artistic principle from the two-dimensional realm into digital space. To this end, the artist adds to his visual, continuously self-reproducing superimpositions an additional audio layer, which functions not least as an emblematic allusion to known voices, orders, and systems from the contexts of politics, history, and society. 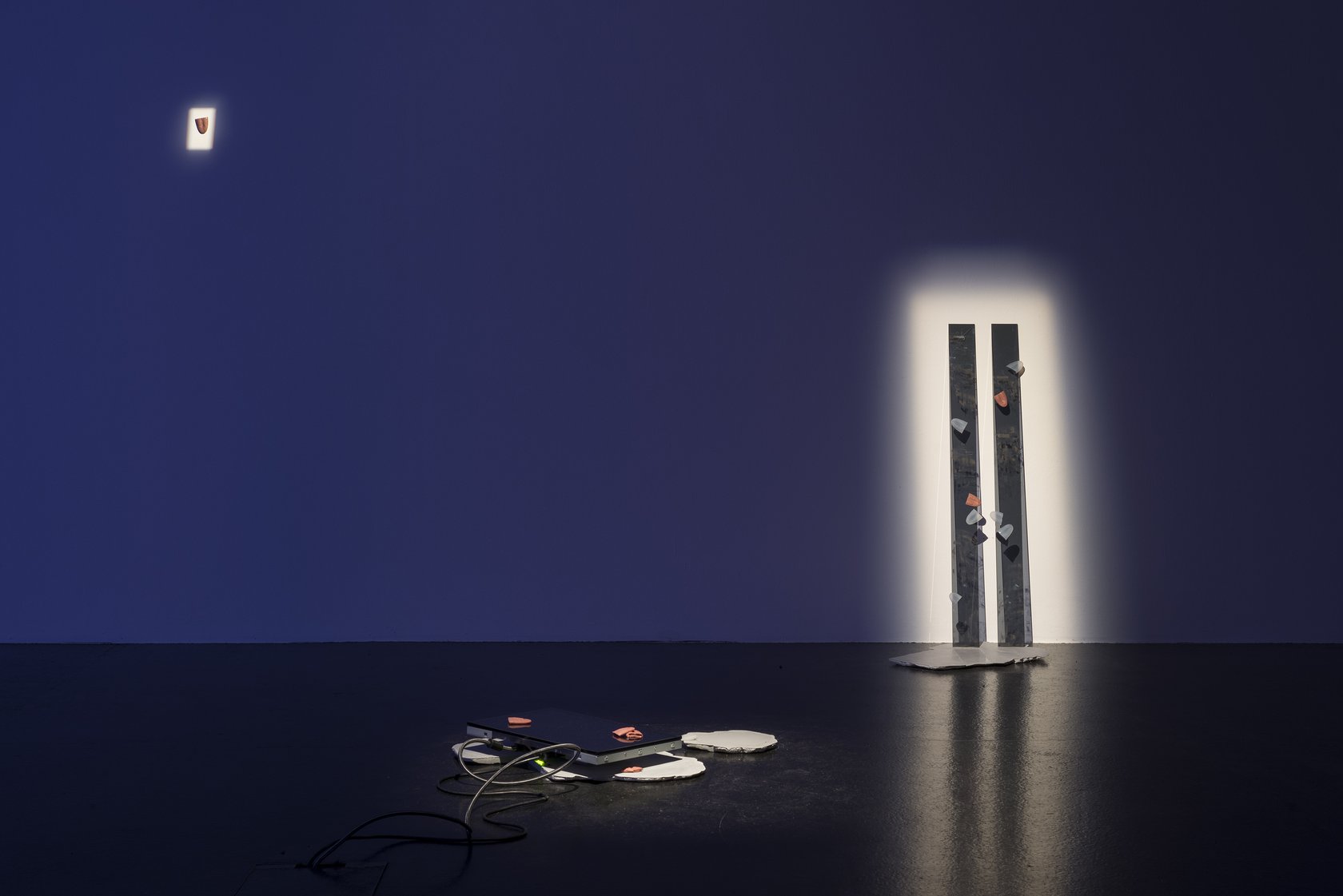 In the installation Untitled / (Get rid of your tongue) (2018/19) by Markus Sworcik (*1977 Graz, lives in Graz), commissioned specially for this exhibition, raw severed fake tongues serve as a metaphor for this human organ, which in turn stands for the sensuality and physical desire it conveys. On the other hand, the tongue refers to our need for exchange and to human communication, along with its current channels and the (often difficult) ways of handling them. Here, as well as in his other transdisciplinary works, Sworcik negotiates materiality and engenders poetic expression by intertwining ascribed meanings and natural forms. In the practice of this Graz-based artist, the translation of changes to ordered and free, public and private structures plays a pivotal role. 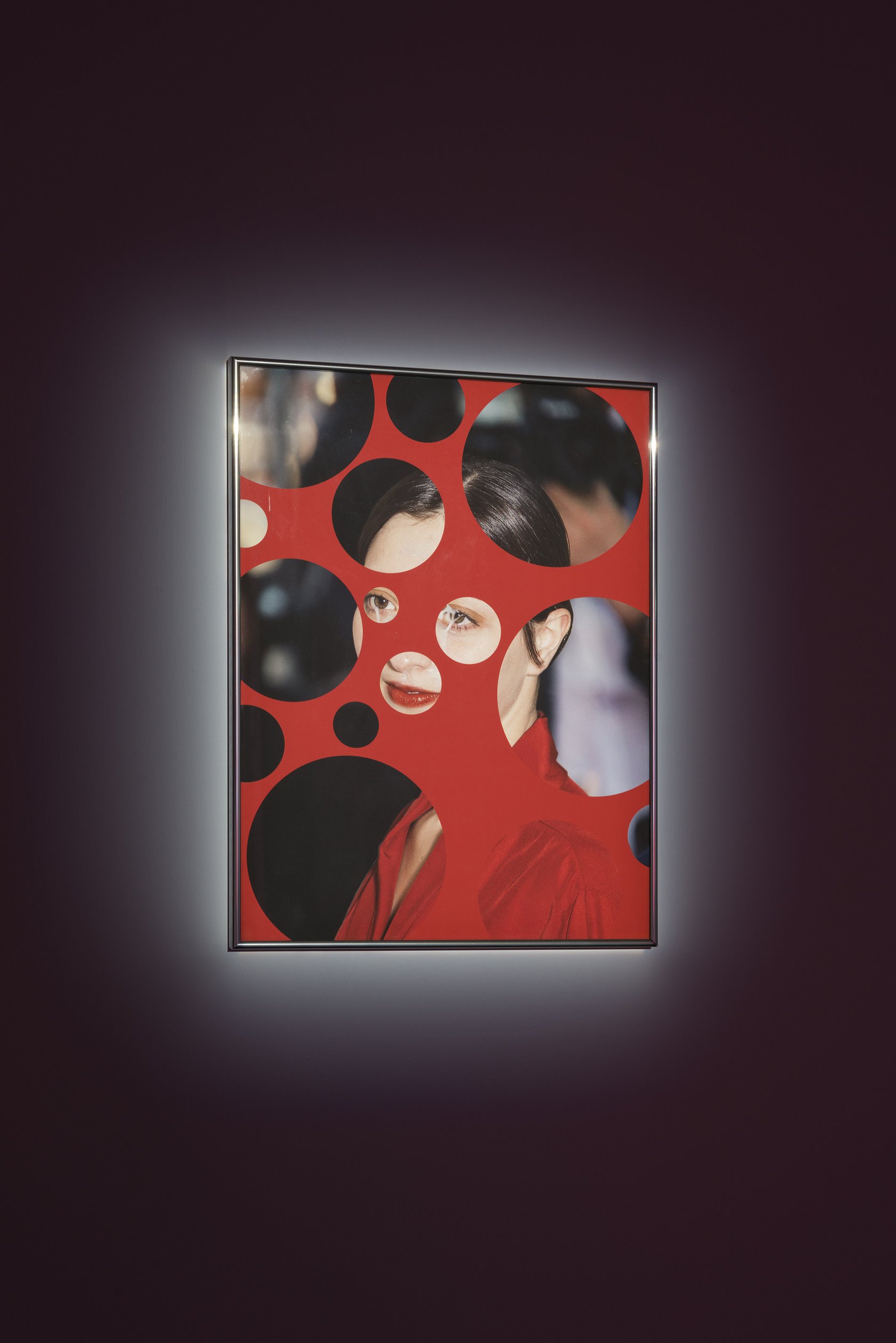 The net artist Amalia Ulman (*1989 Buenos Aires, lives in Los Angeles) thematically explores in her artwork contemporary discourses related to hierarchy, class, and sexuality. The work series Dignity (2017) by the Argentinian artist goes back to her Instagram performance Privilege (2016). The narrative involving a pregnant office worker sheds light on the correlations between power, gender, and racism in the workplace in relation to the author’s position as a practicing artist. In the four exhibited high-gloss photographs, Ulman is pictured with a white fluid on her face, calling to mind ejaculated semen, and is staged like a celebrity against the backdrop of a red carpet. Censorship and the publicness of aggression and intimacy are at the center of the juxtaposition of these two work cycles, one of which is covered by a perforated red display. 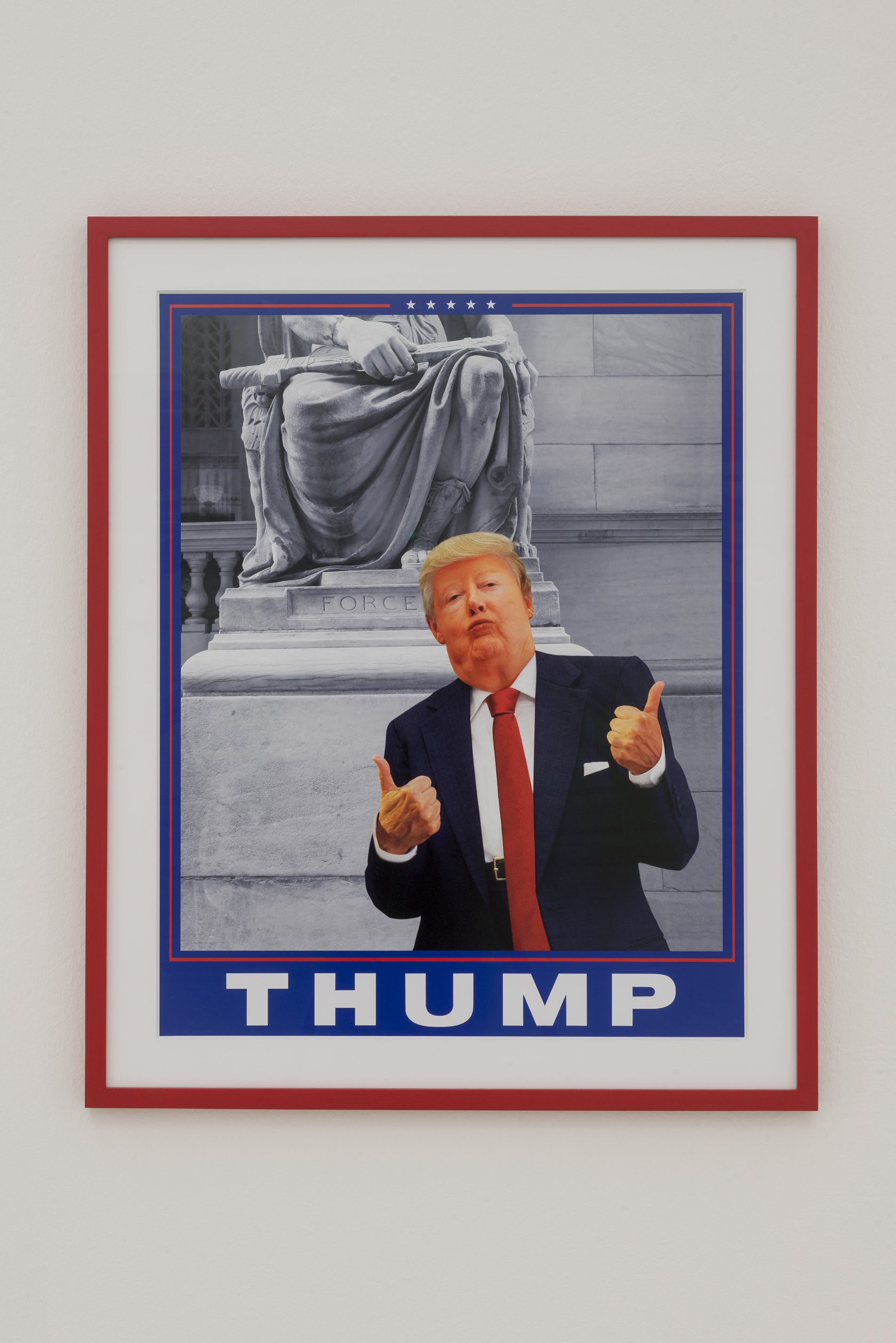 In her provocative photo and video artwork created over four decades, Martha Wilson (*1947 Philadelphia, lives in New York) has been availing herself of role-play, costumes, and exaggeration of others through technical means, in order to explore her own female subjectivity. Wilson’s avant-garde works were created during the 1980s in the context of American research on feminism and still today remain a famous reference point for many artistic investigations into this thematic field. For the works exhibited in Graz—Thump (2016/18) and Makeover: Melania (2017)—the artist slipped into the roles of the incumbent US President and his First Lady. For the former, Wilson donned a wig and applied suitable makeup for a performance in front of the Trump Tower in New York, where she was photographed in a power pose. 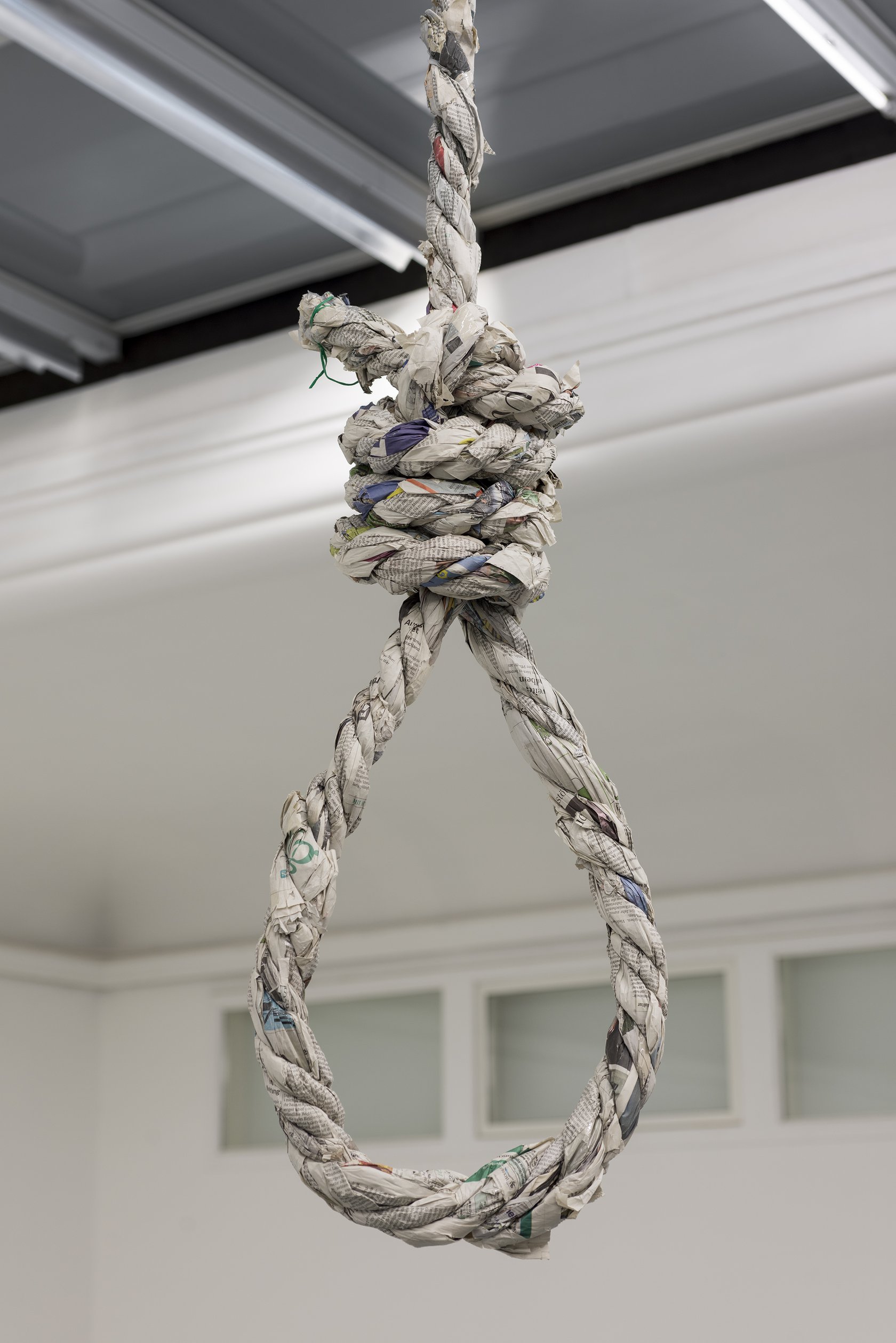 The work group Egoplastik (2018/19) by Joseph Zehrer (*1954 Perbing, Bavaria, lives in Cologne) consists of three ropes bound as hangman’s nooses. Each Egoplastik contains material marked by political, social, and artistic references: newspapers, plastic bags, and acrylic on canvas. This moment is typical of Zehrer’s artistic surveys, which often methodically explore legalities within the art world through sculptures, installations, paintings, and drawings. A fourth noose with components taken from wastepaper baskets in the Künstlerhaus venue will be created during Hate Speech: Aggression and Intimacy by the exhibition visitors with the help of Künstlerhaus staff. Their participation will transform the Egoplastik into a social sculpture.