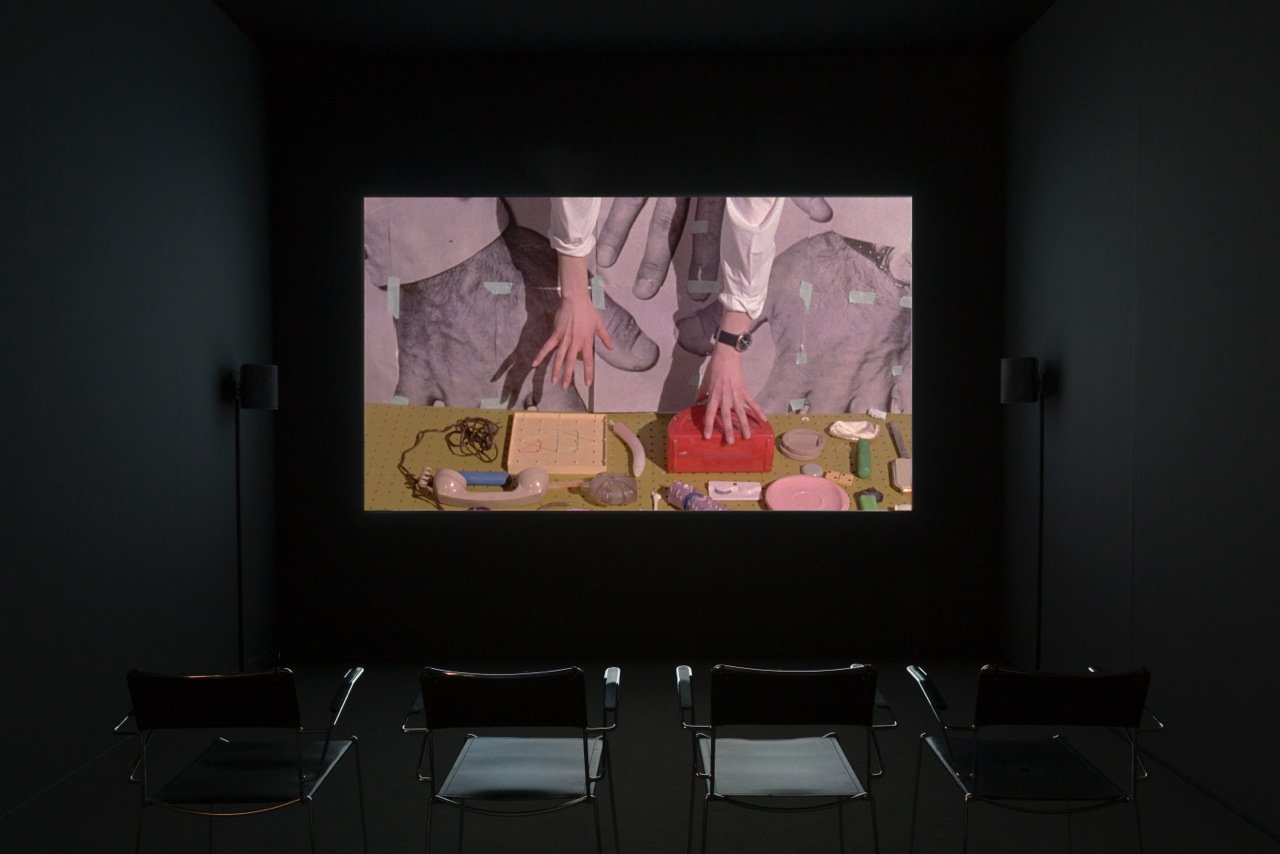 Soft Film is a film that deals with things. It shows us things that we all know very well, and its way of dealing with these things is really soft, indeed, not rigorous, imperious, determined, but tender and cautious. We see hands arranging things next to each other on a perforated board, we see them being piled up on velvet textile or stored away on a shelf of glass or simply assembled in front of a wall. Their constellations are fragmentary and fragile, just like the things themselves. Everything might easily collapse like the two towers of Manhattan shown on a picture from the time when they were still standing. Photographs, for Cwynar, are like real things because both of them are relics. They help us to sustain our recollection. We read the words „An aid to memory“ but most of „memory“ has already been rubbed off the paper.

The things, as well, may show all sorts of damages and of defects. Most of them are used and worn and injured. And all of them are foundlings, abandoned, expelled, displaced. The artist finds them in the internet and invites them to her home. She offers them asylum. Some have been left behind by a sudden case of death. Others have simply been gotten rid of. But whatever might have happened: it is no longer manifest. It is no longer there to be detected. A brand new pair of sneakers, designed and born in a computer, can only be a disappointment. These shoes, as yet, have no experience. Each of the other things could tell a story that we, however, only can surmise. In every thing a song is sleeping, but, oh, the magic word is long forgotten.

The basic weakness of these things seems to result from lacking a relation to each other. They simply don’t belong to that totality of mutual support that Martin Heidegger, philosophy’s most stubborn advocate of ordinary things, designated by his self-invented term of „Zeugganzes“. A cup may sit in its cupboard, but even there it still relates to spoons and plates and jugs. It belongs to a world of usefulness. Such beneficial networks don’t exist in Cwynar’s film. Here, all the things are separated and alone. They don’t expect support from others. They don’t believe in communality and co-operation any more. One of the cups, for instance, still carries its transparent plastic wrap as a protection. Many suffer from some handicap or other. We see the broken handles of a suitcase, we see containers that will remain for ever empty, we see the caps that used to seal those little bottles filled with medicine, we see the cases once containing jewelry and snobby watches. Now, all of them are singles. Singles that are traumatized, that’s what they are.

But yet, such things convene in every private Wunderkammer. In Cwynar’s case, there are a lot of useless things, with insufficiencies, defects and flaws, things that are weak and old. Even the material the artist used to create this film (that had to be digitalized) was old and weak: celluloid, a substance that is no longer in existence. In some short takes we also see the ancient photometer and the long outmoded camera that registered all this. A slight nostalgic stance is undeniable, just as a wish to heal the wounds. The velvet box that formerly contained the wedding rings is opened and then closed again with much the same devotion as before. Three candles melted and deformed by too much heat still jointly form a beautifully bended line of beauty. And even our cup eventually will come across a book or a bag or something made of yellow plastic.

The site where such a meeting might occur is an ordinary perforated board, a board that hobby craftsmen use to store their tools in proper order. Order is, of course, at stake here, too. But order is, of course, not mindlessly established. Instead, the film wants to explore the conditions of its possibility. Therefore, the holes arranged in lines and columns on the board may, so to speak, incorporate the aspects of syntagma and of paradigma, basic dimensions of each language that we know, a logical scaffold that re-appears, mise en abyme, as a little box with rubber bands that can be fixed to tiny plugs to try out different set-ups. But the cups and the caps and the candles refuse to be turned into cyphers of a hieroglyphic script. At times there seems to be a hint at a hidden order based on functional equivalents, formal affinities or obvious relations of the colors. But this will never add up to a whole. From time to time, therefore, every arduously constructed constellation will be wiped away again by hand.

This is something to distinguish Cwynar’s film from the bulk of works that nowadays are dealing with the problem of the thing as well. An award-winning video by Camille Henrot, for instance, „La Grosse Fatigue”, shows her research, done at the Smithsonian Institution, that aims quite innocently at a truthful order. Gabriel Orozco sorts out the waste of our globalized economy that has been washed ashore at the beaches of Mexico. Simon Fujiwara puts well-known object on a pedestal hoping that a baby-seat will thereby turn into a puzzling face. Deanne Shapton designs a catalogue for a fictitious auction organized to sell all sorts things that were important in the rise and fall of some romantic love affair. And Neil MacGregor, not an artist, but at least director of a big museum, feels free to tell the whole story of mankind with respect to a set of no more than forty things.

Compared with so much confidence the film by Sara Cwynar shows the merits of its softness all the more. It is so soft not even to dismiss the quest for meaningful orders of things as such. It confronts us, after all, with permanently new attempts to create substantial relations. Colorful draperies are mounted, postcards affixed, small busts of politicians accumulated. If nonetheless no evidence ensues this is not due to diffidence or laziness. It need not be a sign of weakness if one refrains from treating things like props. In order to detect the limits of their order, though, one has to be prepared for serious subordination. Only then will it be noticed that a smooth and unobstructed Zeugganzes can only be upheld by stupid narrow-mindedness. The filmmaker deserves our praise for her attempt to keep the order of the things so open and so unrestricted. Her Soft Film is a small and – therefore – just as well a grand appeal against a rigid regime in the realm of things, a realm of which we also, after all, have always been a part.