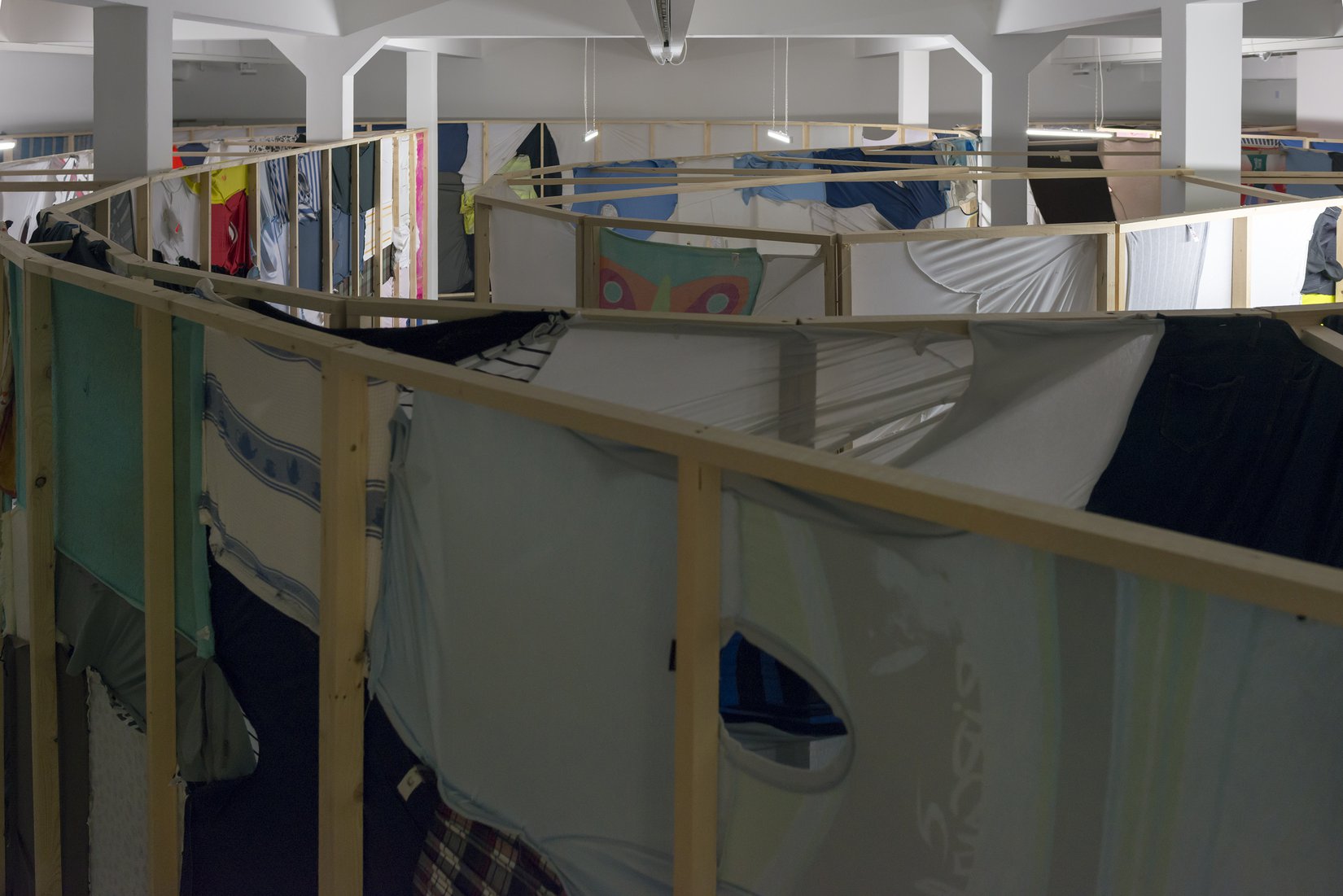 On the occasion of his exhibition, artist Stuart Middleton discusses livestock handling systems, ‘invisible forces’ and questions of positioning.

The system replicated in the show is a serpentine shaped structure designed by Dr Temple Grandin. It is shaped in such a way that the natural defensive instinct of the herd animal to circle is used as a way of controlling and gradually singling out the herd into individual beasts. The curving shape of the structure means that all this happens with the minimum of (visible) human intervention, almost voluntarily by the animal as they move through it. This means that the animals are as calm as possible when they reach their destination (which could be a range of things from veterinary care, dipping, tagging or slaughter). The major benefit for the meat industry is the reduced cortisol levels in the meat, less bruising, and therefore higher yield – profit.

And how does all this fit into the overall concept of the show?

I’ve been interested in these particular systems for some time (after an unsuccessful proposal to use one as a human crowd control architecture for an art fair ‘projects’ commission a few years ago). I was initially struck by aerial photographs of them in America online – how gut-like their shapes are. That made me think of the repetitive digestive processes happening there at different scales – the structure, the ruminant themselves (cattle having multiple stomachs), and their entry into the food chain and eventually into our human guts.

I have been thinking of it as a moment where an organic or non-standardised body (of the animal) meets the standardising machinery of industry, there are a multitude of structures or spaces that operate like this, and I am trying to stretch that to include the art gallery and even the house; when something comforting becomes oppressive and when something oppressive becomes comforting.

The serpentine structure and the walls make you feel slightly lost and weirdly alone – not really sure of where you’re at and what to do, except of moving forward.

One of the key specifications of Temple Grandin's systems is that the humans must remain mostly invisible to the cows, through hidden platforms and smooth solid sides. I wanted to build such an idea of ‘invisible forces’ into my model; in the show you have limited views of other people but because of the thin fabric I used to cover the walls you can hear others quite loudly walking around inside the structure and it is hard to locate them.

I also liked the inevitability of a spiral-type shape, as well as the illusion of meandering, Elizabethan gardeners used spiralling ‘snail mounds’ as viewpoints over their elaborate gardens; they force a kind of movement that is very restrictive but that feels more expansive than it is, also it creates a drive or momentum to reach the end, just see around the next corner.

So, in the end, it is about this strange dialectic of following your own urge, drive or instinct while in fact being led and directed by a system that makes quite some smart use of these very instincts, right?

That’s a good way to put it.

Not to turn this livestock handling system into an all-encompassing symbol (and without wanting to be too cynical), but: the structural similarity to the role of the artist within the art system seems very striking. Isn’t the figure of the spiral also at work in a certain form of self-reflexivity, of turning towards yourself and your own position as being within the ‘handling system’. How would turning against the ‘system’ look like? What are the options (if there are any)?

Maybe the idea is a bit hackneyed, a bit ‘wake up sheeple.’ But usually that is from a position presumed to be from outside somehow; educated, enlightened or woke. I wanted to position myself as both inside the structure and as part of what constitutes it. If you look through the neck holes of the T-shirts and jumpers, the spaces outside of the system are even more cramped and confusing, full of supports and subsidiary structures that help to buttress it.