Letters from the Slaughterhouse Floor 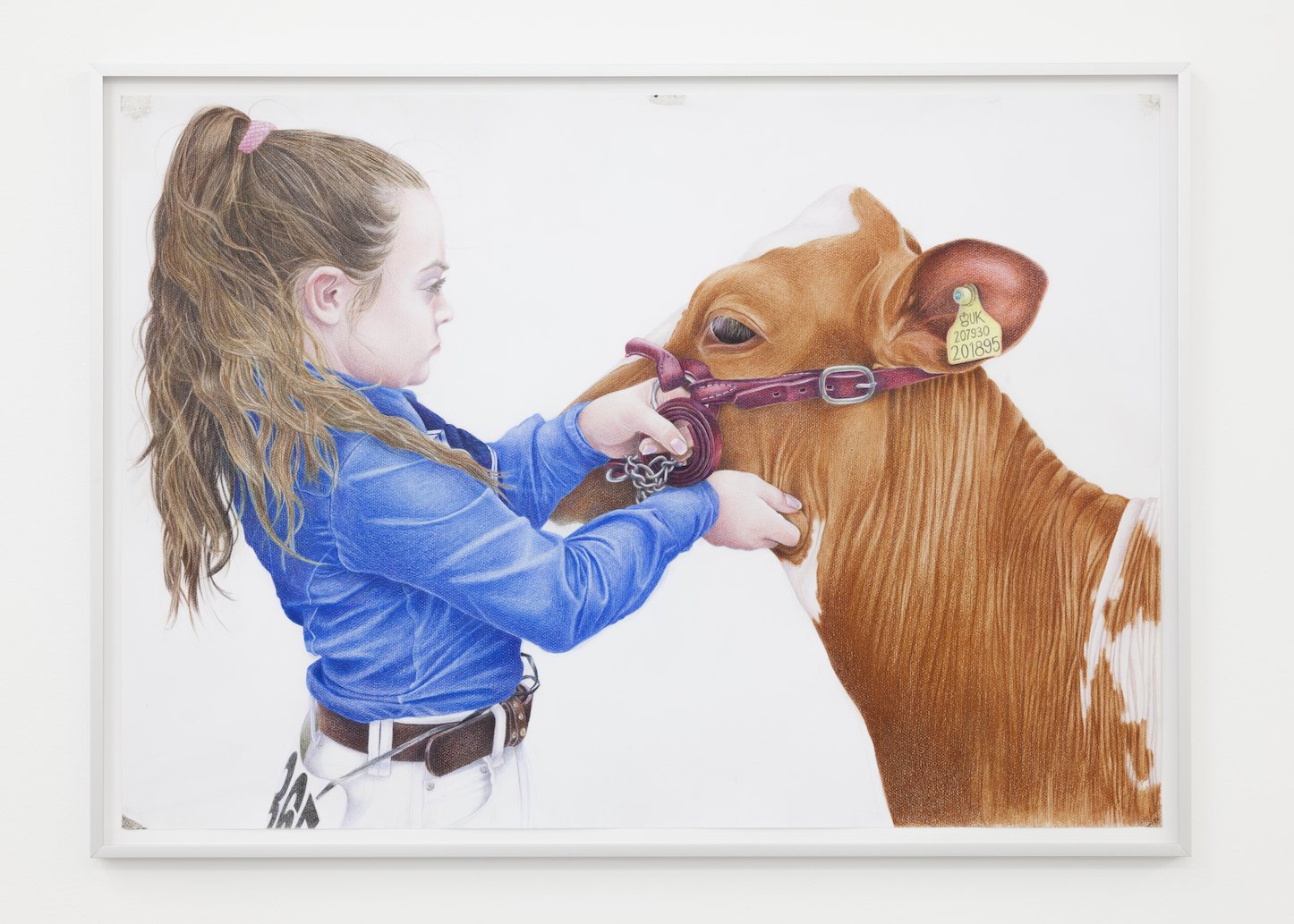 On the occasion of the exhibition “Motivation and Personality“ of British artist Stuart Middleton, author Bhanu Kapil has written a poetic letter to the artist. A meditation linking art and life to the realities of industrial slaughter.

On Thursdays, they burn the blood.

A cool air, bright with the smell of the coming snow, and meat, or the inside of meat, or the memory of meat, drifts East across the plains.

Greeley is where the slaughterhouses are: wet architecture.

A room built to comfort, lift, orient, plop then hold.

I stand in this room for you, accompanied by B, a technician at the JBS feedlot, with whom this visit has been negotiated at some cost by an acquaintance of mine, an adjunct at the University of Northern Colorado, who went to high school with B, and who now regards me with intense suspicion.

Never again will I eat an egg or a loin, a haddock or a string of bones.

Dear Stuart, what are the maximum and minimum conditions of a house?

Nevertheless, I approach the house for you.

The snake swallows a large animal and distends to accommodate its form.

“Not long ago, workers at the massive JBS feedlot east of Greeley were having trouble moving cattle through one of the Grandin-designed serpentine chutes that are in use throughout the world. Each time cattle approached a particular part of the chute, the leader stopped, causing a massive backup.” — Source Magazine, Colorado State University.

“Brett Ulrich, assistant general manager of the feedlot, called Grandin and sought her counsel. After Ulrich described the problem, Grandin realized cattle were balking because sunlight was pouring through a hole in the chute.”

“Temple had us cover the hole with a piece of cardboard,” Ulrich said, smiling at the memory.

“As soon as we did that, the cattle started moving through the chute without any problems.”

Dear Stuart, do you use cardboard at any stage of your artistic process? What adhesive do you use? To patch something torn in two.

Dear Stuart, one of the first things that happened to me when I moved to Colorado was this: a man pushed me off the road. I was on West Mountain Avenue in Fort Collins, just past its intersection with College, about twenty-five minutes from the outskirt of Greeley, or its hem. The man was in a car. I was on my bike. My bike tipped over. The man was screaming, incensed. He screamed: “Go back home. Go back to Mexico.” He got out of his car. By this time, I was angry too. I slammed my hand palm down on his car bonnet and yelled: "Go back home? Go back to ENGLAND?"

This is what I saw: Pink streaks on the walls. Coffee-yellow shit up to the ankles. The pale, silky blue fur inside the ear of a real cow. The gate was silver, with a raised bar the color of lemon curd. Three of the cows were maroon, glossy. I could see their spines through their skin. I had the strong desire to remove my clothes and stand in that yard, an unacceptable action that entered my mind, the part of my mind that could still think above or near that smell and thus was exposed to view. B touched my arm, a signal. I looked and there it was. The “chute.”

I cut and pasted those words from a web-site called Center for Immigration Studies, which self-defines as “low-immigration, pro-immigrant.” What does that mean?

I feel dizzy after looking at the ICE website, created by George Bush in 2003. To trace: the history of the SWIFT meat-packing raids in Greeley: undocumented workers, the slaughterhouse industry, graffiti on the walls of an industrial ruin.

For you, I go there.

I visit the carcass of a former plant.

With my fingertip, I trace a V — a tag — on the orange wall.

On the way home from Greeley, I stop at a country market to use the toilet. A sign above the mirror reads: “This restroom is for paying customers only.” On a shelf by the counter are local goods. I pick up then set down a mason jar of honey.

A bee flexes its throat, I think, above the tiny flowers at the edge of the lot.

A lot is a paddock.

A paddock is a yard.

The yard opens to the chute.

The chute to the floor.

You lowered the ceiling and made it into a floor.

Describe the space beneath the floor, I said.

Imagine this: an array. B takes me into the cooler and there it is: gold and pinned, open and fluttering like the veins of an accordion.

Is this a zoo?

“Shortly after his reincarnation, the butcher opened his eyes and discovered that he was hanging with one leg on a hook in his own shop that had been taken over by his son.” — S, M, L, XL, O.M.A, Rem Koolhaas, and Bruce Mau.

I note the immense contrast between the hygiene of the cooler and the meadow itself.

B’s shoes are two different colors, I notice for the first time, looking down at the ground, trying to remember what it looks like, so that you, in turn, can feel it, what it’s like to be here, though you’re in Austria itself.

Dear Stuart, night has fallen as I write these words, though where you are, it is morning.

You are welcome to visit Colorado at any time.

I will take you to the slaughterhouse at midnight.

Let’s light the kill floor with candles at 2 a.m.

These images are for you, Stuart.

Is it too late to include them

As an agricultural contribution

Bhanu Kapil teaches at Naropa University in Colorado and at Goddard College in Washington State. She is the author of numerous short stories, poems and novels including “The Vertical Interrogation of Strangers” (2001), “Incubation: A Space for Monsters” (2006) and “Ban en Banlieue” (2015). Kapil’s literary style is not easily classifiable, as it is located between poetry and prose.