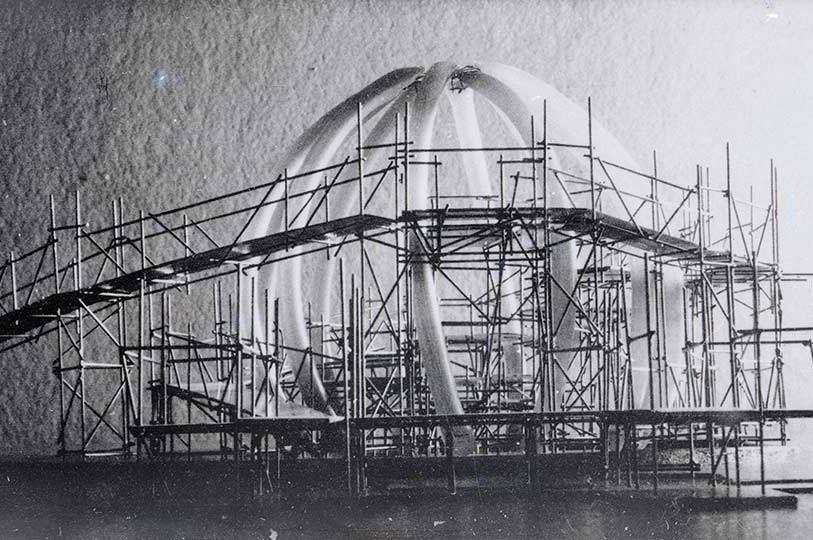 Presented at the Künstlerhaus exactly fifty years ago, the exhibition "trigon 1967“ is considered to be contemporary art’s debut in Styria. Architect Eilfried Huth, who was responsible for the show’s architectural display structure, photographed the installation process.

The third edition of the tri-nation biennial “trigon” titled “ambiente / environment” took place from September 5th to October 15th, 1967, at the Künstlerhaus Graz and in the surrounding city park. Instead of presenting painting and sculpture alone, as was traditional, the exhibition’s director, Wilfried Skreiner (*1927 – 1994 Graz), who had been appointed head of Neue Galerie Graz the year before, and his two consultants, Umbro Apollonio from Italy (*1911 Trieste – 1981 Bassano del Grappa) and Zoran Kržišnik (*1920 – 2008 ) from Yugoslavia, decided to execute a innovative and highly contemporary thematic concept.

Inspired by Lucio Fontana’s (*1899 Rosario – 1968 Comabbio) slashed monochrome paintings—in which the artist moved away from two-dimensional painting and into three-dimensionality—and influenced by the psychedelic tendencies of the time, the works of art in the exhibition addressed the perception of space. The sixteen artists in the show from the Trigon countries Austria, Italy, and Yugoslavia (Ivan Picelj, *1924 Okučani – 2011 Zagreb, had to cancel) presented installations and environments that explored questions of space, blended different genres of art, and encouraged visitors to actively participate.

The architects Günther Domenig (*1934 Klagenfurt – 2012 Graz) and Eilfried Huth (*1930 Pengalengan, lives in Graz), who began working together under the name “Planungsgruppe Domenig/Huth” in 1963, were commissioned to develop an architectural display structure for the exhibition. They developed a walkway through the show, leading visitors into and through the Künstlerhaus and finally outside via the apse.

The house-high entrance pavilion, designed by Domenig and Huth, drew a particular amount of attention. Their initial plan for a dome structure made of red pneumatic tubes ended up falling through because a thunderstorm damaged the material during construction. In the end, the two architects decided upon a spiral-shaped ramp with scaffolding, covered with plastic tarp. Ticket and bookshop were located at the entrance of this so-called “transformer,” whose purpose it was to alter the visitors’ perception and prepare them for the exhibition ahead. In its center, there was a multimedia show. After making provisional repairs to the storm damage, the red tubes from the original design were employed as seating in the exhibition.

The graphic designer Horst Gerhard Haberl (Gerhard Wolf) (*1941 Graz, lives in Sulz, Burgenland) designed a remarkable and innovative exhibition catalogue, comprised of special paper and additional inserts, which seemed more like a contemporary artist’s book than exhibition catalog. A second publication with documentation supplemented the first. Even though these two publications helped to understand the complexity of the exhibition, “trigon 67” was met with strong disapproval. It was subject to cases of vandalism—for instance of Oswald Oberhuber’s tower—and triggered resentment, expressed in numerous angry letters to the editor of Graz’s local newspaper the “Kleine Zeitung.” These letters included demands for the resignation of the cultural administrator Hanns Koren (*1906 Köflach – 1985 Graz), and that Wilfried Skreiner be let go.