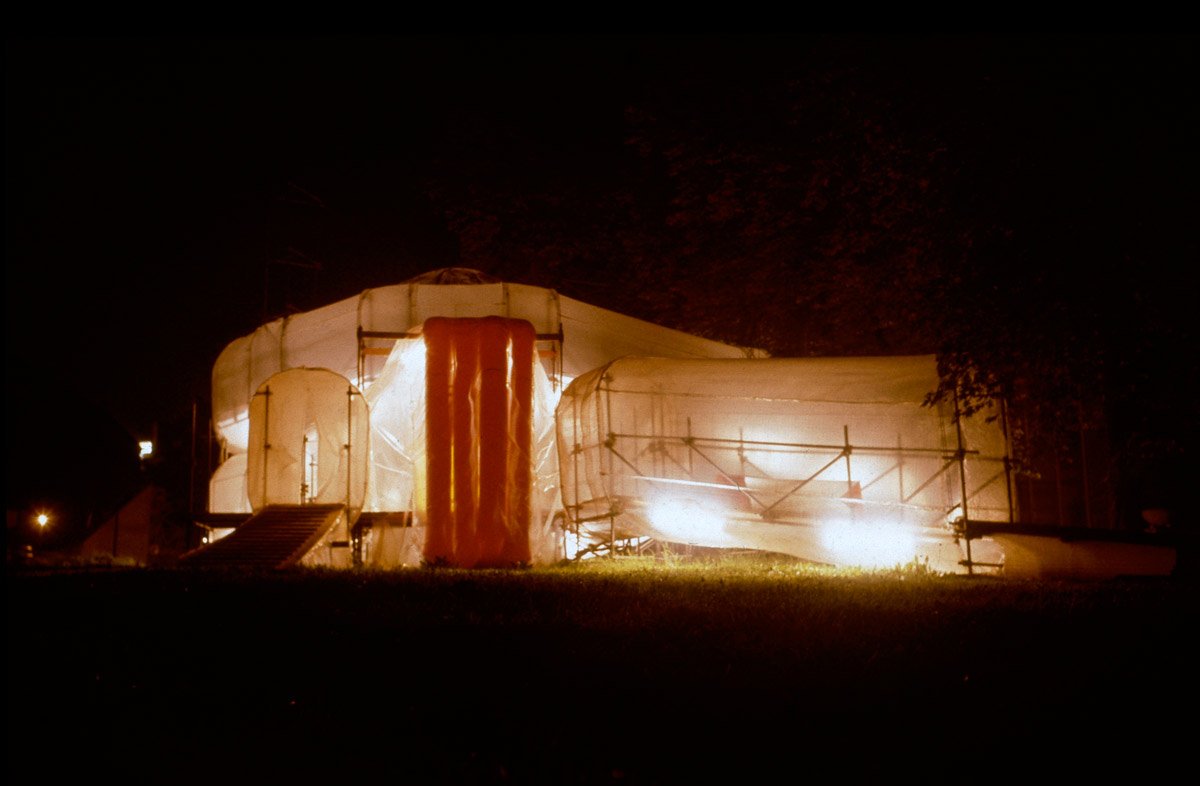 In the following text, author Daniel Zwangsleitner introduces us to a brief history of the post-war housing cooperatives and governmental building policies in Graz and Styria, a hot bed for the architectural avant-garde in Austria. In addition, he illustrates how the experimental 1967 exhibition trigon 67 influenced the ideas and coercion of participatory art and architecture in the area, leading to many new housing projects in which participation by its future inhabitants were key factors.

In the mid 1960s, the period of post-World War II reconstruction in Austria finally came to an end. The country saw itself in a consolidated situation, the most severe housing shortage was eased, and infrastructure was sufficiently functioning. But the social and economic difficulties caused by the war fostered a very pragmatic approach to building. Housing cooperatives significantly influenced the reconstruction after the destruction caused by the war. The housing types that were put to use were considered generally valid and subsequently produced by a copy / paste process in large series. These schematic, standardized plans, which are still widely used today, were able to respond quantitatively to the housing shortage, yet created neither lasting quality nor satisfactory housing, and only superficially dealt with questions regarding public space.

The on-going critique of this dogmatic interpretation of modernism and the reduction of architecture to economic aspects lead to the suspension of the Congrès International d’Architecture Moderne (CIAM) in 1959. The international discussion about the "disintegration of the city" and the disappearance of public space, taking place in the mid-sixties, also occurred in Austria. Attempts to link high urban density with the specific qualities of the individual were expressed in utopian and visionary projects and were conceived by several architects in Graz’ architectural scene, among them Bernhard Hafner, Günther Domenig, and Eilfried Huth, who are known for their still famous project Neue Wohnform Ragnitz. 1959 was also the founding year of Forum Stadtpark, a multi-disciplinary action group of artists, scientists, and cultural workers in Graz.

How does trigon fit into all of this? The trigon tri-nation biennial, which brought together and presented cultural production and practices from Austria, Yugoslavia, and Italy, instated in Graz in 1963 under the aegis of Hanns Koren, drew heavily on the experiences of Forum Stadtpark. On the one hand, the 1967 edition of trigon is considered to be the precursor of steirischer herbst, which is still an active and highly regarded art festival in Graz, and on the other, is known for its experimental exhibition architecture. trigon 67 was called ambiente / environment, and the architects responsible for the design were the aforementioned Günther Domenig / Eilfried Huth. The design of this exhibition, in fact, very much resembled their structuralist approach and aimed at putting forward the idea of a more symbiotic relationship between architects, the various stakeholders involved in the production of architecture, and last but not least the public (see Burleigh 2015, p. 63). Burleigh’s article discussing the trigon biennales of 1967 and 1969 has the title “exhibitions against architecture.” While I don’t consider it directed against architecture per se, I understand the aspirations of the involved actors and architects directed more towards a liberation and expansion of architecture. It can also be understood as a critique of modernist architecture, which was increasingly not able to respond to qualitative needs any longer.

In fact, the architectural concept of trigon 67, as well as the presented artistic positions, were very eager to underline the potential for a built environment that arises out of the inclusion or participation of non-architects. While Wilfried Skreiner (1967) focused on sculptors and painters, architects in general wanted to include the future inhabitants of their housing projects. It must therefore be considered a step of utmost importance in the genesis of what later would be called Modell Steiermark [Model Styria] and as such was to change the way architectural production in Styria took place, the participation of inhabitants becoming a central concern. The importance lies not only in the transformation of the utopian scale to a concrete dimension but also in the presentation of this approach to a broader public. In fact, this exhibition triggered a much cited “Schock der Moderne” [shock of the new] (see Steinle & Foitl 1996) in Graz and led to the corresponding public discussion of unrestrained calls for the resignation of cultural administrator Hanns Koren and curator Wilfried Skreiner. This upturning development, the emerging upheaval, cannot be considered in isolation from socio-cultural change, and it is no coincidence that this took place at the time, i.e. in the late 1960s. The so-called movement of 1968 led internationally to strong social changes, progressive democratization, and above all to a strong politicization well into the private sphere.

In its entirety, Modell Steiermark was never limited to architecture, but was rather only one of many pillars of the democratization of all spheres of life. In fact, it was meant to function as a long-term program for the development of Styria and was instated by the Austrian People’s Party (ÖVP).

In 1968, the Housing Promotion Act was a central step in shifting the competences for housing subsidies from the state to regional governments. In addition to the promotion of the subject and instating upper income limits for residents of subsidized apartments, new funding was made available for housing research, which also included financing for ground-breaking projects such as the now well-known Terrassenhaussiedlung in Graz. Hubert Hoffmann, professor of urban planning since 1959, had a decisive influence on the scene both as an “activist” and as a teacher. The architecture faculty at the University of Technology in Graz was generally becoming a hotspot of the upcoming development. While elsewhere cities were burning due to the 1968 student revolts, a “revolution in the drawing rooms” took place in Graz.

At the same time, the most famous participative processes in architecture were underway on an international level in various countries. In Italy, Giancarlo De Carlo developed the Matteotti housing project in Terni from 1970-75. Lucien Kroll developed the participation dormitory La Mémé in 1970 in Brussels. Christian Hunziker coordinated the participation process New Center for Avully in Geneva in 1973. In 1974 in Graz, Kroll and Hunziker were widely acclaimed participants of the Steirische Akademie für Baukultur [Styrian academy for building culture]. However, the decisive factor was actually that these initiatives found a place in the Styrian model of the ÖVP. The then still councillor for housing and later Governor of Styria, Josef Krainer, gave the impetus in 1972 to set up what was initially only thought of as discussion platforms, dealing with different topics for the future development of Styria. For the platform in charge of architecture and planning, Krainer was happy to find committed comrades in Hermann Schaller and Wolfdieter Dreibholz, who later became central figures in the planning of housing projects in Styria.

The guidelines developed in this working group called "Building and Dwelling" included at its very core the involvement and participation of the future inhabitants already at an early stage as well as the compulsory implementation of an architectural competition for projects with more than 50 units. The first participatory housing projects had already been built (e.g. Eschensiedlung Deutschlandsberg, 1972, Arch. Huth) and the first official competition in the framework of Modell Steiermark (Markt Hartmannsdorf 1982-83, Arch. Windbichler) had already taken place when the legal-framework was established. Talking in numbers, 115 housing competitions were carried out within the framework of Modell Steiermark between 1985 and 1991. In 1986 alone, the share of projects accounted for 20% of the total construction volume of housing in Styria, while the remaining 80 % was organized traditionally via housing cooperatives (Tschavgova, 2010, p.189).

The end of Modell Steiermark in housing came with the federal elections in 1991 when a change in the balance of political power and the extreme right-wing “Freedom Party” (FPÖ) took over the housing department. What, in my opinion, is certainly characteristic of Modell Steiermark is the fact that it is what Otto Kapfinger (1995, p.54) calls "a reform from above," starting from the centre of political power. At the same time, it can be considered an effort by heroic individuals (Weibel 1996, p. 112), coming from many different fields, who left disciplinary boundaries behind for dynamic team processes while interacting with politics. Inner dynamics and the determination to contradict certainly also played an important role. Retrospectively, it is fascinating that in this time and in this place many actors with very different backgrounds and therefore bound to very different interests were committed to one cause, resembling almost a kind of pact, a proverbial “pulling together.”