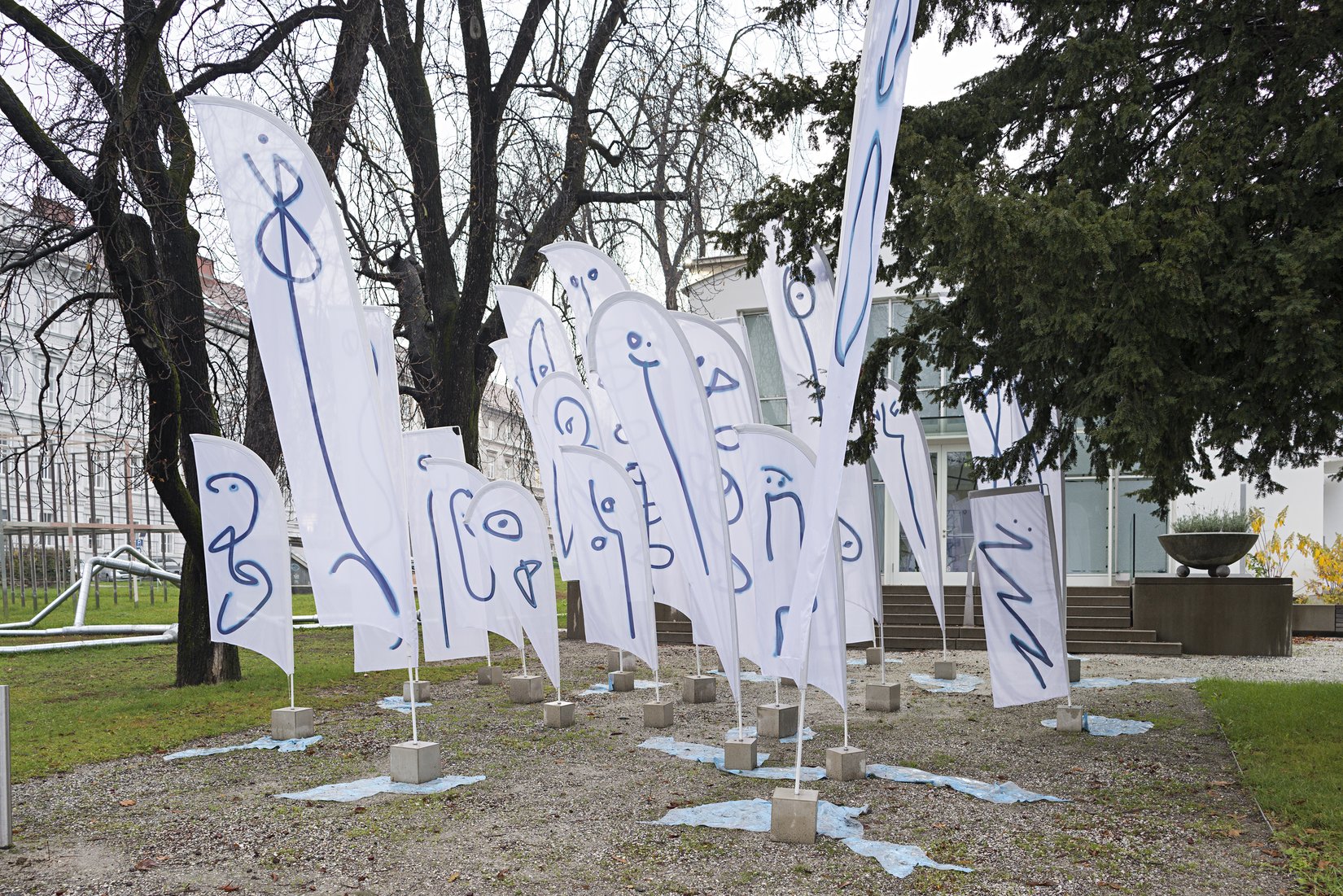 Flaka Haliti on how ghosts and haunting influence her work, the importance of the color blue, and how she navigates different types of spaces, starting with the politics of the personal space.

Your work for trigon 67/17 evolves around the figure of the ghost and the idea of spectrality—what ghosts are you referring to?
The ghost in my work Concerned by the ghost without being bothered (2017) has a starting reference in Jacques Derrida's book “The Specters of Marx” (1993) but even more in later theories on hauntology such as the one from Avery Gordon in “Ghostly Matters” (2008). Her definition of “haunting,” as I understand it, refers to a ghost that you want to acknowledge but you still can’t define or control—because of the own animated state that ghost is able to create as a temporality. A kind of the ghost that demands attention to look at its status quo—as a call that there is “something to be done” ... A ghost that is driven by a desire which sets into motion different possibilities and creates future potentialities as a state, a thing, or a place, which is not yet there but is in a process of becoming. Hence, it is a very optimistic ghost I would say.

Is there a specific idea of “space” related to the figure of the ghost? And if so, which space?
Yes—the animated, performative space.

Is personal or biographical experience important for your work? And if so— why?
The personal space is the first political space I deal with ... from there on many curves merge, based on my ongoing experience of being in-between experiences and the relation of proximity I have to others and other forms of sociality and places, where I have lived so far. As a result, my practice navigates mostly through a certain methodology—through notions of opacity, detouring, counter-poetics, abrogation, and appropriation. However, based on the final visual execution you don’t necessarily know where the story in my work really began and where it intends to end because the content itself is constantly morphing and propagating.

In your work, you often make use of the color blue—may it be in your work for the 2015 Venice Biennial or here at the Künstlerhaus Graz. How do you use it and how is blue connoted in your work?
After Speculating on the blue—which was the title of my work for the Kosovo Pavilion 2015—blue has become a kind of open-ended color to speculate on for me ... I still don’t use it in a medium-type of way, but rather tackle it as a content in relation to various meanings and ways blue has been used in the recent past— especially now, after the time of post-internet aesthetics. However, blue as a starting point entered into my work while I began observing the visual language during the construction of an identity in Kosovo as a new nation-state as a result of the European Union peace mission directions and their aesthetics in use.