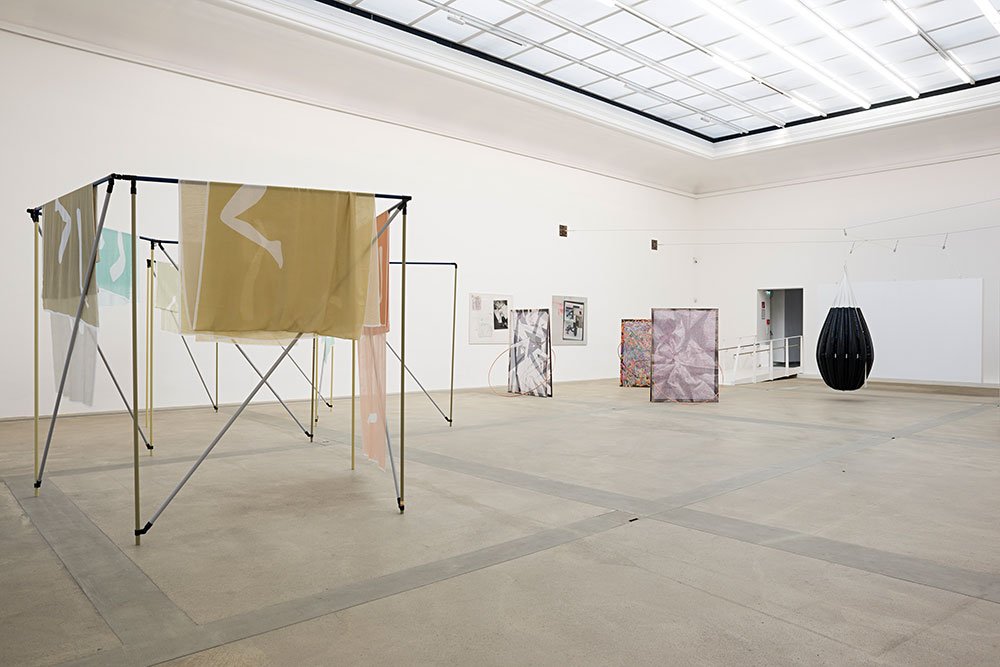 In her installations, drawings, paintings, sound, and video works, the Croation artist Tina Gverović (* 1975 Zagreb, lives in London and Dubrovnik) contemplates, destabilizes, and reconstitutes notions of space, territory, and identity. In the following conversation, Gverović speaks about her interest in the relationship between the fragment and the whole, about the convergence of bodies both fluid and solid, and waves, or the sea, as carriers and metaphors for the unstoppable forces of real and imagined masses set in motion.

You subsumed several groups of works under the title Sea of People, amongst them the work Diamond Cuts: Sea of People which is on view at the Künstlerhaus Graz. What’s the idea behind these works, what holds them together?
I recently developed a number of installations under the subtitle Sea of People. The installations are composed of works reconstructed and remade in a variety of media so as to destabilise forms of presentation and to develop different and shifting perspectives on the topics I work with. In order for a work to have a conversation and connection with its own past, I have to re-stage and re-build one aspect of a work onto the other so that the work becomes cumulative.
The choice of words in the title avoids possible xenophobic implications of metaphors that current mass movements of people might trigger. The collective body is seen as a collection of geographies, but also as a “place” in itself. The body is considered like an object, inanimate, or like a mass, a moving mass, a land mass. Think of being able to watch the positions of continents forming and reforming (via a satellite camera positioned in space millions of years ago)—well, isn’t the current movement of people perhaps somehow equivalent? Bodies are seen as geographical locations. We bring our places with us. And by “places” I mean the places we grew up in, encountered briefly, the places we imagined and romanticized, or indeed demonized from afar. Body parts are connected and organic. Bodies are inextricably linked, networked via invisible ties, pulls, and magnetic attractions. People (groups), when moving en masse are moving as if shifting tectonic plates, as a moving landmass, across space and time.

You often use images and metaphors of water, “the sea”, waves etc. What is it that draws you to “liquidity”?
I’m thinking about places where belongings are washed ashore, where animate and inanimate cargo attempts to meet with the land. In thinking about waves, how they are formed, how they relate to each other, and about the force that accompanies them, I am encouraged to think of the unstoppable affects they have on both life and matter. Waves travel in groups called wave trains—each triggered by the forward movement of the sea’s water due to the oscillation of water particles by the frictional drag of wind over the water’s surface. The movement of the wave happens simultaneously in different directions, horizontally, back and forth on the surface, and vertically, upwards-downwards. Once triggered, waves are set in an unstoppable motion, oscillating like a materialized echo over space and time. Waves also make me think about the impact of sheer force, and the effects of that force, which ultimately reach unimaginable scales.
But besides water and waves and how they resonate, I am also thinking about other processes that are also triggered by an encounter with another body or thing (a human can be a “body,” but a mass of water can also be referred to as “a body” of water), such as assimilation or mimicry, i.e. trying to behave like someone or something else.
I am thinking about different types of movements here—water, migration, materials. All the modes of making, though, refrain from claiming substantiality.

How do you deal with the dialectic between hints and a deliberately open structure on the one hand and a certain “literalness” and pretty direct references on the other?
In my installations there is always a dynamic between undoing and unifying different elements that constitute the work. The work often walks a fine line between becoming whole, or coalescing, and being deconstructed, or fragmented. It keeps forgetting itself and keeps reinventing itself. In the act of making installations I became aware of two parallel and simultaneous processes: connecting fragments into a whole and disconnecting these fragments. One of the main questions in my work is: how can a work have a strong sense of loss and belonging at the same time? This, I suppose, could also mean pivoting between making direct references and keeping an “open structure,” as you say.

You often seem to address themes of migration and movement in your work. And often, it seems, certain elements are quite literally “moving” through different bodies of work, migrating from one to the other (e.g. audio recordings with Alexis Taylor, featured in two separate works). What’s your idea of the relationship between actual material, formal decisions, and what could be termed “themes” or “messages”? And how does your work relate to an idea of representation?
I could say that what I would like to achieve is that there could be a number of possible entry points or ways you could read my work. By producing works that evolve from earlier works, the intention is to foreground multiple readings and perceptions of places. The installation Phantom Trades: Sea of People currently representing Croatia at the Venice Biennial is conceived in collaboration with the artist Ben Cain; Diamond Cuts: Sea of People is conceived jointly with Ben Cain and Alexis Taylor. I suppose the reason why I often collaborate with other artists is in order to gain a sense polyphony the process of making.
Some of the installations present transitional scenes—scenes caught between the desire to explore the possibilities of media and form and the complexities of content. But, most of all, I am thinking about the encounter with the work and how to prolong it—both in time and space—taking processes such as adaptation, mimicry, and resonance as triggers and as connecting threads. Works adopt properties from one another, colours mimic sounds and sounds mimic rhythms. If there is a direct relation to a theme, then this relation is translated into the way I deal with the form or the materials.
For example, in one of my recent works one whole floor of the museum took one tone, one colour as a thread that seeped through all the rooms—it was a connecting element that tied these rooms together, unifing them. In one room items of clothing and fabric were gathered in various sculptural formations on the floor. All the items were dyed indigo blue. Here, indigo referenced both the carrier and the substance carried. I was interested in different trades that could be associated with the Mediterranean, especially those reflecting the history of imported and exported colour pigments, assuming a vast variety of social, economic, and symbolic significations. But I also saw this room as an extended painting, one that leaked, was taken somewhere else by the currents, collected, constituting a new beginning. I suppose there are a lot of possible directions—possible currents to follow.